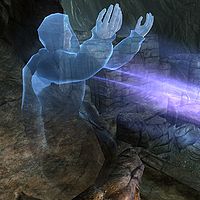 These Enthralled Wizards are Nords found in Labyrinthian during The Staff of Magnus.

They wear hooded black mage robes and warlock boots. They each wield a leveled dagger (up to glass in quality) and may drop a scroll and potions when killed. Oddly, they can cast Vampiric Drain against you despite not being vampires.

Both enthralled wizards in Labyrinthian join together to cast an energy barrier to shield the dragon priest Morokei during the related quest. In order to defeat Morokei and complete the quest, you must attack them to interrupt their casting. It is later revealed that they were the two companions (Atmah and Hafnar Ice-Fist) Savos Aren entered the chamber with, and that he sacrificed them to keep Morokei contained.