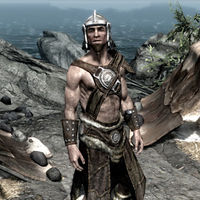 Elmus is a Nord brewer who can be found initially at Bujold's Retreat. Later, he moves to Thirsk Mead Hall, provided the player takes back Thirsk from the rieklings. He wears hide armor with a matching helmet, boots, and bracers. He also carries a Nordic sword with a steel shield.

While Elmus is at the encampment, he has a fairly simple schedule. He wanders around the camp all day long, interacting with the present objects, as well as talking to the other warriors. At 8am, Elmus has breakfast, which lasts three hours before he resumes his wandering around the camp. He quits his wandering once again at 5pm for his dinner, which also lasts three hours. Elmus resumes his wandering afterwards, continuing for another two hours before heading to his tent for some sleep. If you have not yet cleansed the Beast Stone, Elmus will be unable to sleep and instead head over to the stone and work there for the duration of the night. This is all because he, like many other Solstheim residents, is under the influence of Miraak. Elmus will return to the camp at 7am. When you use the Bend Will shout on the Beast Stone, Elmus will snap out of his trance and retreat back to the camp. If he's spoken to there about the situation, he'll be thankful and say "I'd rather make mead than ugly shrines. You did good getting us away from there." With the stone cleansed, Elmus will finally get some sleep at night and will sleep for the duration that he would normally work at the stone.

When camped out at Bujold's Retreat, Elmus can be seen conversing with either Bujold or Kuvar. In the first scene with Kuvar, however, his dialogue is incorrectly attributed to Kuvar, and vice-versa:

Bujold: "How are you holding up?"
Elmus: "It's rough out here. But I'm getting by."
Bujold: "Not everyone was built for this kind of life. There's no shame in that."
Elmus: "I can handle it. Just wish there was more mead, is all."

Elmus: "So... what do you plan on doing?"
Kuvar: "What do you mean?"
Elmus: "We're not going to be lounging around in a hall anymore, so you'll have to be a little more useful. Can't make mead down here."
Kuvar: "I... I hadn't really thought of it. I'm still hoping we can go home."
Elmus: "This is home, now, boy. Start living it."

After the Nords have retaken Thirsk Mead Hall, Elmus can be seen having random conversations Bujold and Kuvar once again:

Bujold: "Were you able to salvage any of the mead?"
Elmus: "Most of the old brew is still good, but I had to get rid of some of the newer batches."
Bujold: "What did they...do to it?"
Elmus: "Just trust me, you don't want to drink it."

This is the merchandise found in Elmus' merchant chest. These items are only available if purchased from the merchant; they cannot be pickpocketed or stolen. They are restocked every two days.

This Skyrim-related article is a stub. You can help by expanding it.
Retrieved from "https://en.uesp.net/w/index.php?title=Skyrim:Elmus&oldid=2135418"
Categories:
Hidden categories: