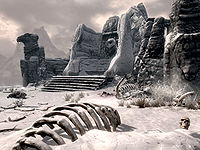 Eldersblood Peak is a mountaintop dragon lair south of Morthal. Its word wall teaches part of the Disarm shout.

To reach Eldersblood Peak, go a short distance west on the main road south of Morthal and look for a dirt path to the left. The long dirt path winds past an unmarked hunter's camp and North Cold Rock Pass.

Before the dragons' return, the word wall will be guarded by three frost trolls, and occasionally some frostbite spiders as well. There is one troll on the lowest level, and the other two are near the word wall on the highest level.

After the dragons' return, there will be a dead troll on the lowest level. A burned corpse surrounded by scorch marks is found on the second level, next to the table. In front of the wall is a dead cow and another dead frost troll. The leveled dragon is usually resting on the wall, but the skeletons near Rannveig's Fast can enter the dragon's detection area, and it will fly off to investigate.

Regardless of whether Dragon Rising has been completed, on the second level there is a sacrificial table with two leveled potions. To the left of the third level is a snowberry plant. The boss chest is to the right of the word wall, between the word wall and the brick wall.