The UESPWiki – Your source for The Elder Scrolls since 1995
< Skyrim: Items / Smithing(Redirected from Skyrim:Dragonbone Battleaxe)
Jump to: navigation, search 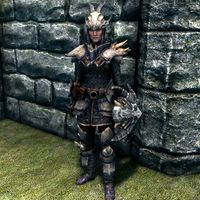 Dragonbone weapons are the highest-quality weapons available in the game, but are only available if the Dawnguard add-on has been installed. They do not appear in leveled lists, and can only be obtained via crafting or by looting a Keeper. All items except ammunition can be tempered using 1 Dragon Bone, and having the Dragon Armor Smithing perk doubles the quality improvement.