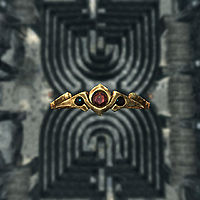 The Diadem of the Savant

The Diadem of the Savant is a unique circlet that serves as the reward for conquering Shalidor's Maze, although a respawnable version can also be found outside of Froki's Shack (see bugs). As would be expected for an item associated with Shalidor, the circlet makes it so that all spells cost a lower amount of magicka to use. While it may be useful to mages due to its enchantment and since it can be worn without disabling the Mage Armor perk, its defensive capabilities cannot be improved further as it cannot be tempered.