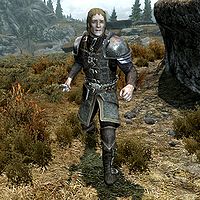 Dawnguard Novice Hakar is a Nord bandit and a novice vampire hunter who appears as a random encounter after completing either The Bloodstone Chalice for the Volkihar vampires or A New Order for the Dawnguard.

Upon meeting him, two vampires will be attacking and he will be in distress, it will be up to you to save him, as he pleas to you during combat. If he survives the encounter, he will run up to you and say that he cannot handle the stresses of vampire hunting. He will drop all of his equipment on the ground before he runs away. He will run to Frostfruit Inn in Rorikstead if he isn't killed by some random encounter along the way.

During combat he will yell out:

If he survives he will say:

"Look, take whatever you want. I'm getting out of here!"