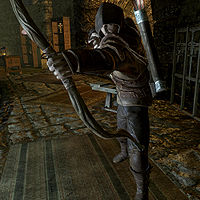 Cynric Endell is a Breton thief and a member of the Thieves Guild in Riften. Before joining the guild he worked as a jailbreaker but quit after a botched job landed him in a High Rock prison for three long years. He now spends most of his time training his archery skills.

After waking up at 8am, Cynric will wander around the Cistern for two hours and then head over to the dining table for a two hour breakfast. Once he's finished, he'll relax for another two hours and then spend the rest of his day training his marksmanship on the Cistern practice target, with a four-hour break between 6pm and 10pm. At 2am he calls it a day and heads back to his bed, which is just to the left when entering the Cistern from the secret entrance.

He wears the standard Thieves Guild armor, gauntlets, boots and hood. He is equipped with a steel dagger and a hunting bow supplemented with 12 steel arrows. He also carries two lockpicks and up to 18 septims.

Before you convince the guild of Karliah's innocence, he'll refuse to speak with you:

"So it's true. You've turned traitor. I can't believe it."

After though, he'll be stunned:

"I never saw this coming, I thought we were just having a run of bad luck."

Before speaking to Brynjolf:

"So, you're finally going to make Guild Master, eh? Well, you better track down Brynjolf to seal the deal."

If spoken to during the ceremony:

"Hang on. When the ceremony's done, we'll talk."

"I think you're all right. In fact, I'm kind of impressed how well you're doing around here. Just keep it between us, okay?"
"I've seen a lot of thieves come and go, but I've never seen anyone as good as me."
"I could crack the lock on any house blindfolded before you even got your picks out of your pocket."
"Been in the Guild a long time... joined right after Brynjolf. Not interested in leadership though, that's more his kind of thing."
"I don't care if Vex was chosen as a Guild Third over me, she deserved it."
"I kind of like watching things from where I am. Making money is all I care about."

When spoken to directly he can be asked about his profession:

How did you become so good at picking locks?
"Pull up a chair, my friend... this is quite a tale. When I started out in this business, I wasn't really interested in the Guild or being a thief."
With skills like yours? Why not?
"I didn't mean to imply I was earning an honest living either. With my lock picking aptitude, I was a natural at jailbreaking... made a great deal of gold doing it too."
Jailbreaking? What's that?
"It's where a client pays you to get arrested, and you get thrown into a prison for the express purpose of breaking out. Usually it's to free someone the client cares about... and sometimes to... well, to kill someone on their behalf. Either way, the trick was in the escape, and that's where my strengths came in handy."
Why did you stop doing it?
"Well, as a jailbreaker, you work alone. No Guild to back you up. I'd do jobs for the Thieves Guild and the Dark Brotherhood, but if things didn't go as planned, I was on my own."
I think I see what you're getting at.
"The last jailbreak I attempted failed. I was imprisoned in High Rock for three years before they let me go. After that I promised myself I'd never do it again."
Why did you join the Guild and not the Brotherhood?
"I don't know. I think I realized that out in the world, my skills would bring me more wealth as a thief rather than an assassin. Killing someone in a jail is much easier than what the Dark Brotherhood deals with. I guess I wanted to play it safe. I already knew Delvin, I asked if I could join up, and that was that."

Once you become Guild Master, he'll offer his support:

"As long as you continue to make us all rich, I'm behind you."

If you've been suspended from the guild, Cynric will refuse to talk to you, stating:

When exiting conversation he can say:

"Some other time, perhaps."
"I'm sure we'll speak again."

Cynric will at times engage in random conversations with fellow guild members, as listed below:

Niruin: "All right. I have everything you asked for all ready to go."
Cynric: "I hope this deal goes through. I'm putting quite a bit of coin on the line... and the last two you set up fell through."
Niruin: "I don't understand it either. They were a sure thing, I swear."
Cynric: "You just better hope this one isn't another waste of my coin."

Rune: "Take a look around. Have you ever laid eyes on such wealth?"
Cynric: "Never. This is the best the Guild's done since I've been a part of it."