The UESPWiki – Your source for The Elder Scrolls since 1995
< Skyrim: Quests: College of Winterhold: Favors
Jump to: navigation, search

Brelyna Maryon is a serious student at the College of Winterhold. After completing Under Saarthal, you can find her back at the College (likely in the Hall of Attainment). When you speak to her, she'll request your help: "We're all trying to become better mages, right? Well, I need someone I can practice a few spells on. Nothing dangerous, really. Would you be willing to assist me?" If you agree to help her for a price, she will offer an amulet in return. Apparently, she has developed a type of Alteration spell that she needs to cast onto someone else, and she will be relieved that she won't have to ask J'zargo for help.

It's Not Easy Being Green[edit]

When you are ready, Brelyna will instruct you: "Please hold still, and don't move." As the spell is cast, a tiny flaw becomes apparent: your vision is now green. Alarmingly, Brelyna will exclaim, "Oh dear. That wasn't supposed to happen." Then she will ask, "Do you... do you feel all right? You look very, umm, green." She will apologize profusely, assuring you that the green effect is temporary. It will fade after a few in-game hours.

After the effects of the first attempt fade, and if you are being a good sport about it all, return to Brelyna and she will ask you to help her again. She confidently asserts that she has everything worked out. You can also express your doubts about proceeding, but in the end, agree to her ministrations. She will cast several more spells which will turn you into a horse, a cow, and a dog. 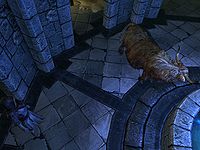 The results of the second spell 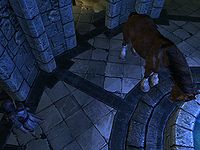 The results of the third spell 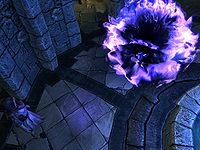 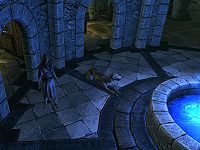 The results of the fourth spell

With each mishap, Brelyna bolsters her resolve: "Oh my. That isn't right! Just wait. Just... I can fix this.", "Oh no, that's not it at all. Let me try again...", "This really isn't turning out the way I'd hoped.", and then, "I'll get it right this time, I swear." On her final attempt, you are returned to normal, and she says, "There, all better."

When all is set to right, Brelyna will reward you with a random, level-dependent Resist Magic necklace, and you both can agree to never speak of this again. Brelyna will also become a potential candidate for marriage, and can be asked to join you as a follower.

The level provided in the table is the minimum level that you must be to obtain that version of the necklace; however, even at higher levels it is still possible to receive the lowest-level necklace. Below level 8, you will not receive any necklace.