The UESPWiki – Your source for The Elder Scrolls since 1995
< Skyrim: Places: Groves
Jump to: navigation, search 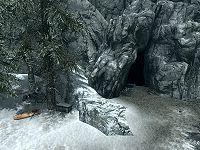 The Ancestor Glade is one of several ancestor glades found on Tamriel. It is the only one located in Skyrim and is so named for being home to swarms of ancestor moths. The cavern is central to the quest Unseen Visions, although it can be visited anytime.

This glade is the only location where Yellow Mountain Flowers and Ancestor Moths can be found. With the Fishing Creation installed, the waters of the glade are home to the rare AngelfishCC, Pygmy SunfishCC, and SpadefishCC.

The entrance is high in the mountains, above the snowline east of Falkreath, south of Pinewatch. A few paces to the northeast of the entrance, behind a large rock, is an old campsite complete with an extinguished campfire, with two pots hanging over it. One contains a salt pile and the other a venison chop. Beside the campfire are an ice wolf pelt, a snow bear pelt, a dead ice wolf, an unowned bed roll, and a novice-locked chest. Everything in and around the campsite is marked as owned and, as such, taking anything is considered stealing, although you can skin the dead ice wolf without committing a crime.

The entrance descends into an overgrown passage that leads to a dead end. Another path on the left follows the wall, leads you across a fallen tree, and then into another short tunnel opening up to the main glade. If you have not yet started Unseen Visions, you'll be ambushed by three spriggan earth mothers in the first area of the cave, regardless of your level. During the related quest, there is a wooden gate that will close behind you as you enter the main glade, to prevent you leaving prematurely. There are many piles of rocks, all found against the outer walls of the main glade, which have items of treasure on top. The items can easily fall off, so it's worth scouring the ground nearby and downhill from them if an item is missing.

The following harvestable plants can be found in the area. Hanging moss is entirely within the initial cavern, while most other plants are found within the glade itself. (Note: this is one of the areas that was targeted for extra plants in Skyrim Special Edition, so the counts are much higher in that version of the game and are listed separately from the counts for the original game.)

There are five Canticle trees found within the glade, which appear as trees covered with white and pink blossoms. During the related quest, they can be harvested for their bark. Before the bark can be harvested, you will require the draw knife, which is located by following the path from the entrance to the main glade as it descends several flights of stairs. At the bottom, a path passes under several square arches formed by a flat stone being placed atop two upright stones a few paces apart. In the center of an island surrounded by hot springs and shallow water is a strange stone shrine, with the knife in the center. It is only obtainable during the related quest. One of the Canticle trees and several yellow mountain flowers are nearby.

Another Canticle tree can be found by following the outer wall to the left of the entrance to the main glade. Continuing past this, you will find a large pile of rocks against the outer wall with a random potion and leveled potion of magicka on top. Back from the entrance, following the outer wall to the right, you will come to another pile of rocks with a medium coin purse on top. Continue following the wall down to the western corner of the glade and on yet another pile of rocks is a random dagger and random enchanted shield. Follow the stream towards the springs until you reach the shrine. From there, the stairs to the southwest lead up, curving to the southeast before coming to a flat, stone landing. Turn southwest just before the landing, passing across several more heated springs, to the third Canticle tree. To the west of it is a pile of rocks with a random enchanted greatsword on top. 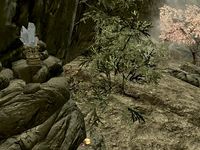 Inside the Ancestor Glade

Return to the landing and follow the stairs and path to the east as they curve northeast, bringing you to another Canticle tree. Following the outer wall beyond this tree, you will find a pile of rocks with a random bow on top. From the fourth tree, there is a path to the southwest just left of the one you got here by. This one leads upwards past a pile of rocks topped with a filled random soul gem in a holder. On a lower rock are four loose septims, an amethyst and a silver jeweled necklace. Beyond these is a spring coming out from under the outer wall before dropping over the edge and forming the largest waterfall in the glade. Across the stream is the fifth and final Canticle tree. Just past this, concealed by a fir tree, is a final pile of rocks where you will find a random enchanted helmet and a ruby. You will be above the first turning of the stairs, with a short drop from here. 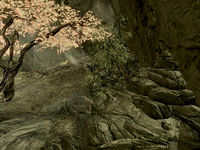 There are multiple swarms of ancestor moths all around the area, as well as a few gatherings that land on the flora around the glade. The former can only be interacted with during the quest, while the latter you are able to harvest like other insects for their wings for use in alchemy. Near the first tree, to the left of the entrance, are the most that can be caught individually, either landing on flora or flying on their own between patches of flowers.

Once you've collected the knife, harvested the bark and attracted seven swarms of ancient moths, you will need to enter the beam of light near the shrine in order to read the Elder Scroll of Blood. After reading the Elder Scroll, you will be attacked by a leveled group of either Dawnguard soldiers including an armored troll, or vampires including vampire's thralls, depending on your chosen side. These enemies will continue to respawn every few days, like any other dungeon inhabitant. They spawn in a group of five to six at the foot of the stairs leading into the glade; if you sneak, it's possible to accidentally walk right up to them.