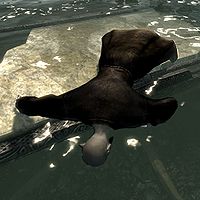 A dead alchemist at Evergreen Grove

Alchemists are dead Dunmer conjurers found throughout Skyrim. They all wear boots and Black Mage Robes. They all carry a nirnroot, a rare ingredient, and a leveled dagger. There is one in a cell in Fort Greenwall, one in a hanging cage outside of Fort Dunstad, one at the giant camp Cradlecrush Rock, one on a rock in a river near Talking Stone Camp, and one on a sunken altar at Evergreen Grove. They can be a good source of ingredients in the beginning of the game. 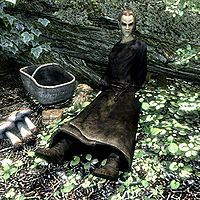 This Alchemist is an Altmer conjurer found at Clearpine Pond up against a fallen tree. She wears black mage robes and boots. She carries a nirnroot, a rare ingredient, a leveled dagger, and a copy of the Alchemy skill book De Rerum Dirennis. Beside her is an apothecary's satchel containing one common, uncommon, and rare ingredients each, with a 25% chance of containing one random potion of healing, of magicka, or of stamina. There are also two taproots and a blisterwort found beside her, along with an empty flower basket. 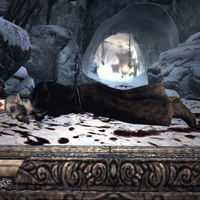 A dead alchemist found in the Altar of Thrond

Three alchemists can be found dead in Solstheim.

All three alchemists wear leveled, enchanted robes; from level 1-7, it will be black mage robes. From level 8 and up, the enchantments will match your level, and will fortify either Destruction, Restoration, or Alteration. From level 10, there is also a 25% chance the robes will have a regenerate magicka enchantment. Lastly, all of them wear the same type of boots.

They all carry a sample of nirnroot, some random, rare ingredients, and a leveled dagger (up to glass quality at level 18).