Shivering: The Lady of Paranoia

Travel to the House of Dementia and meet Syl, the Duchess of Dementia. Syl is a very paranoid woman and is convinced that someone is out to get her. She appoints you to the position of "Grand Inquisitor" and tasks you with uncovering these conspirators. She also grants you the assistance of her torturer Herdir for the duration of the quest. Herdir is a capable Imperial who can be found in the House of Dementia's Torture Chamber. He is quite efficient at "persuading" people to talk using his favorite tool, a bolt of lightning. The countess then leaves you to your investigation with one final warning: "If no one is found, you will be held responsible."

You can start the "investigation" with Syl's steward Kithlan, who is conveniently located in the House of Dementia's main chamber, or with Ushnar gro-Shadborgob in Crucible. After torturing or persuading either of those two, you can learn that Anya Herrick, another of Syl's assistants, has been looking even more afraid than usual, and that she may know something. After some brief coercion from Herdir, Anya will reveal that Ma'zaddha is involved in a plot against Syl. Questioning him at this point, however, will reveal nothing, as he boasts that you don't have enough evidence against him.

A quest update suggests you question Crucible's townsfolk about the conspiracy. As Haskill says, "Paranoia is the order of the day in Crucible. Many keep their eyes open constantly, and some of those eyes may have seen something useful." Certain citizens, such as Caldana Monrius, Bhisha, Cutter or Sickly Bernice, will reveal, with some "persuasion" from Herdir of course, that Ma'zaddha has been meeting surreptitiously with Nelrene, one of Syl's Dark Seducer guards. 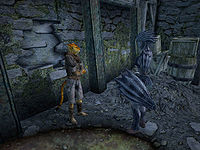 The two conspirators will meet after midnight, near the sewer gate by Brithaur's House. Ask Herdir to wait out of sight, and sneak close enough to eavesdrop on their conversation. If you have difficulty eavesdropping, a good hiding place is located behind the crates underneath a nearby set of stairs. The way to get the best view and listen to the conversation is to use an invisibility spell and stand right next to the two. Once the discussion has ended and Nelrene has departed, confront Ma'zaddha and he will reveal that he is indeed involved in a plot to kill Lady Syl and requests that you meet him at his house in a day's time for more information. If you choose to confront Nelrene immediately after you confront Ma'zaddha she will deny that she is involved and say you have no evidence. The quest log then suggests you need proof or to be more persuasive with Nelrene. If you go and get Herdir to follow you again you can have him torture Nelrene three times and she will admit she is guilty and implicate the ring leader of the Conspiracy Muurine. Your other option instead of confronting Nelrene after overhearing the conversation is that you can simply choose to wait for a day and enter Ma'zaddha's house. 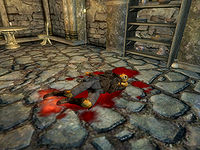 After one day has passed, enter Ma'zaddha's house for your scheduled rendezvous. Unfortunately, as soon as you enter, you find Ma'zaddha lying in a pool of his own blood. Search the corpse to find his key, which opens a cabinet in his room, located upstairs. Inside you will find Ma'zaddha's Crinkled Note and Nelrene's Ceremonial Shortsword. Retrieve both and speak to Nelrene. Confronted with the evidence, she reveals that Muurine was the mastermind behind the plot. Locate the would-be assassin and interrogate her to hear a confession. Once you report your findings to Syl, she requests that you meet her in the Torture Chamber. Once you are present, you'll notice that Muurine has been imprisoned in the central cage, awaiting her fate. After passing judgment, the Duchess executes Muurine herself, activating a lethal electric trap and crushing Muurine's conspiracy for good. Pleased with your efforts, Syl then rewards you with the unique bow Ruin's Edge and the rather meaningless title of "Courtier of Dementia".