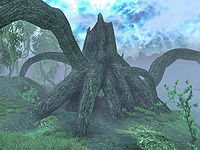 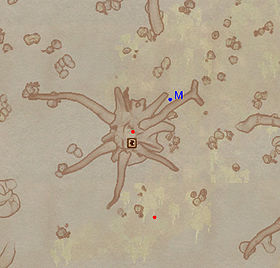 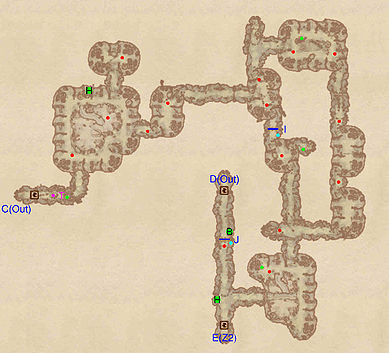 With the highest concentration of Rot Scale, Thorn Hook and Withering Moon plants in the Isles, Swampgas Hole is a paradise for the budding alchemist and is also a good place for leveled loot. The first zone is quite linear: just make your way through the root tunnels to door E. As soon as you enter, avoid the Spore Pod trap at T and loot the amber limb at H. At the next intersection, the roots at I will block the way: head north and remember to loop around it in order to collect some loot from a hollowed stump. Head south again and open the roots at J to gain access to a boss chest (B) and an alternate entrance (D). Loot the amber limb at H and enter Swampgas Burrows via door E. 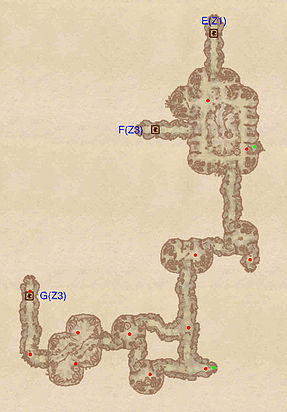 Once again, this zone is extremely linear: make your way through the root cave, picking up the wide range of flora along the way. In the first room, you may immediately enter the final zone, Swampgas Depths, through door F. However, pressing on till door G, leading to the same zone, is recommended. Be sure not to miss the two hollowed stumps of this zone: one in the lower level of the first zone and one in the south-easternmost corner of a small loop. Head to door G and proceed to the next zone. 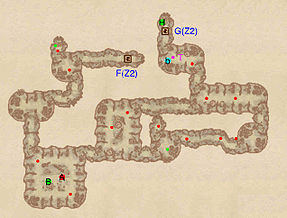 Depending on your choice in the previous zone, you will arrive in this zone from either door F or G. If you chose the latter, immediately loot the amber stump at H and avoid the spore trap at T. At the next intersection, heading left is recommended, as you gain access to a hollowed stump. Press on to the final large room in the southwest, where you will find a boss chest (B) guarded by a boss-level monster (A). Head north and exit through door F for much quicker access to the first zone.