The UESPWiki – Your source for The Elder Scrolls since 1995
< Shivering Isles: Places: Gardens
Jump to: navigation, search 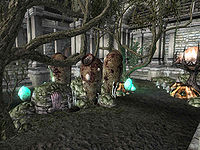 Private Gardens is a garden in the New Sheoth Palace owned by the ruler of the House of Dementia.

Unlike its manic counterpart, the Halcyon Conservatory, the Private Gardens are always deserted apart from Dark Seducer guards who patrol them ceaselessly, and, as the name suggests, are not open to the public. None of the members of the House of Dementia ever visit.

A total of 52 drab and depressing plants grow here:

Two doors lead into the House of Dementia and one leads to the Duchess' Quarters. There is also a hidden escape tunnel leading to Xirethard.