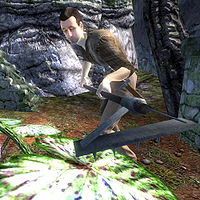 From the moment he wakes up at 8am he will immediately head outside to start working on his garden or cleaning a little bit the surrounding area, and will continue with this routine during a period of fourteen long hours. He will only take a two-hours break at 11am and 5pm, when he will instead grab a piece of food that he manages to find, to have his breakfast and dinner. After a long day of hard work he will return to his house at 10pm, where he will stroll around until he finally goes to bed at 12am, to gain energies for another day of work.

Horkvir's wardrobe includes a coarse linen shirt combined with brown trousers and the matching loafers. Like his double, he also carries an iron bow, an iron dagger, the key that grants access to his house and a leveled amount of gold. He can only rely on his dagger during combat since he lacks of the arrows to use the bow, and in any case his dagger breaks he will use his fists instead.

A dedicated workaholic and clearly the most active citizen in Split, all Mania citizens will point you towards Horkvir for more information. When you get close to him, he may take a rare break and comment: "Yes, I can take a moment to talk with you." When you talk to him, he will reveal the problem: "I'd get more work done if it weren't for my layabout double living in town." When asked to elaborate he will tell you: "Terrible drain on productivity. Never know who's who. It's been a problem for too long." He will then tell you the tale of the mage that changed everything in Split: "A wizard did it. Stupid layabout mage. Had a theory about each of us having a Manic and Demented side. He decided to test the theory. Cast a spell. Split us all in two. Do we get twice the work done? No! Ridiculous. We're not allowed to take care of it either. There are rules. And I don't want to end up on the Hill of Suicides. You, on the other hand...." He will then explain what must be done: "Get rid of that Demented bunch. Useless, anyway. Don't get a lick of work done around this town. If you get rid of them, I'll make it worth your while." If you request some time to think about his offer, he will respond: "Too much thinking, not enough work getting done! Fine. You think it over. But stay away from the other me, that Demented Horkvir. He'll try to offer you the same kind of deal, that handsome devil, but he can't be trusted! Make the right decision." When approached again he will ask: "Made up your mind yet? There's work to be done." If you accept to kill the demented, he will fill you in: "Good. A little hard work will do you some good. Just get rid of those Demented freaks, and we'll all be happier. And stay away from us Manics! You kill any of us by accident, you won't be getting anything from me." When asked about Doubles again, he will remind you: "You should be taking care of this, shouldn't you?" He will also greet you with: "Don't you have work to do? Like getting rid of those Demented bastards?" and bid you farewell with: "Work hard!"

Should you choose to help out the Dementia side of Split, he will refuse to talk to you: "I heard you're working for those Demented freaks. Stay away from me!" Should you manage to fail the quest, he will hatefully say: "You've made a real mess of things here." When asked about Doubles at this point, he will add: "You've made a mess of all that. You're a terrible worker." If you work for the Demented and manage to slay his lazy counterpart, he will be grateful, although still busy: "You killed him? Good. I've got to get back to work. And so do you. Keep at it." If you successfully complete the quest and kill all the Dementia citizens he will commend you and hand you a reward: "Got them all, did you? Good work! I promised you a reward, and here it is. Now, go find some other work to do, you layabout!" When asked about Doubles again, he will add: "Looks like you've taken care of it. Good work. Now, go find something else to do." When you talk to him after the quest he will comment: "Good that things are settled. We can get back to work." or even share a bit of his philosophy: "Exercise your mind and body through working hard, each and every moment." After the Main Quest, he will be stunned when he sees you: "My Lord Sheogorath!" After conversation, he will add: "My Lord rules strongly and without exhaustion."

His double seems to share the same feeling towards his counterpart, as he will tell the first time you speak with him: "My double is always working. It takes all my energy just watching him work. It's got to stop."

At different stages in the Main Quest, Horkvir will share different rumors with you and other NPCs:

"Hey there. I'm Horkvir Bear-Arm. They call me that because I once wrestled a bear, not because I work all day out in my garden without a shirt on." (listen)
"Hey there. I'm really busy. Got lots to do. So if you don't mind, make it quick." (listen)
"I guess I can spare you a minute. But not more than that. I've got to get back to work. Always more work to do than time to do it." (listen)
"Well, I guess I can take a short break. A short one, mind you. I have lots to do still." (listen)
"Greetings, Madgod. I normally don't stop to chit-chat, but it's truly an honor. What can I do for you?" (listen)