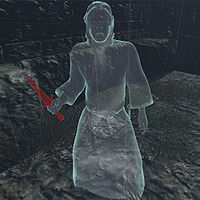 Hloval Dreth is a Dunmer healer and resident of the ruined city of Vitharn, which was overrun by its own brethren centuries ago. As a result of the cowardice, inaction, and incompetence displayed by the denizens of Vitharn, their ghosts were cursed by Sheogorath to relive their final moments in perpetuity.

He wears a black robe and is armed with his own unique dagger called the Dagger of Depletion. Hloval can cast a decent Frost Damage area spell and has an ability which gives him resistance to normal weapons and magic.

Hloval was born with stunted magicka, but, being as egotistical as he is, he went on to become a mage anyway. This, however, wasn't Hloval's biggest sin. Just days before the tolerance of the Vassal Fanatics snapped, he met up with them to, as he described it to both Count Cirion and his friend Anglor, negotiate. In reality, he offered to help them during the invasion, if he could become their leader afterward. The vassals declined his offer, and his treachery was later discovered by the count. Nonetheless, it was too late. The vassals invaded Vitharn, and Hlovel found himself standing in the defense line with a total lack of magicka, making him an easy kill for the attackers. During the related quest, it's up to you to restore his magicka, so he can defend himself against the Fanatics and help lift the curse.

You will find him in the Vitharn Bailey, standing next to Desideratus Annius, desperately trying to cast his spells. When the first wave of attackers run through the southern gate, he will quickly be slain, while the Fanatic screams: "Die, faithless priest!"

When you finally manage to approach him in the chaotic battle, he will shout out in panic: "Power! I need power! Unless you can give me the magicka to help these soldiers, get out of my way." Afterward, he will start to explain his problem: "The citizens are in my way. Should I kill them? No? Too bad. If only I had more magicka. I could kill the Fanatics and then rule this town!" When asked about the siege, he will readily tell you about the situation, his attempt to convince the brethren, and the "list": "The Fanatics? What's to understand? They were just after my power. But it's mine, all mine. They wanted me to convert Vitharn, but I fooled them. I put them on the list. Oh, yes, they're on the list now! Because we refused to convert, they lay siege to Vitharn. If they had agreed to let me rule, I would have helped them. But now they're on the list." When you leave the conversation he will add: "I'm short on patience as well as magicka. Out of my way! Once I regain my power, I'll show you."

At this point, asking the other ghostly defenders about Hloval will net you several opinions. On the plateau near the gate wheel, Althel will comment: "0, 5. Hloval is our priest and healer. 7, 7. Unfortunately he was born with stunted magicka, but not a stunted ego. 2,1. He does the best he can, but he never seems to have enough magicka. 5, 6." Desideratus Annius will say: "Hloval healed my betrothed once. Then he ran out of magic. He said he needed to find someone to lend him some before he could help her more.", while the unnamed Vitharn Soldier near the southern gate will say: "Hloval dances a little too close to Sheogorath, if you know what I mean. Those born with stunted magicka shouldn't become priests and healers." Inside Vitharn, Count Cirion will reflect on Hloval and his 'negotiations' with the Fanatics: "Hloval's treachery is second only to my cowardice. My curse will not allow me to help you with his need." The best help can be found in the small chapel in the northwestern part of Vitharn Keep, where Anglor prays eternally, on Dreth's orders: "Prior Dreth has tasked me to pray for Vitharn's safety." Seemingly not knowing about Hloval's treachery, he will tell you: "Prior Dreth met with the Fanatics to turn them away. They did not see the wisdom of his words. Instead, they sent soldiers to sneak into the keep. The defenders in the bailey failed to stop them from opening the main gates." It also becomes clear Hloval once used Anglor as a source for magicka: "It was an honor for me to help Prior Dreth. The pain of the stab wound was a small sacrifice to restore his magicka." After this, when you ask Hloval Dreth what his problem is, you'll make the list as well: "Problem? I supose [sic] you think that everyone with stunted magicka has a 'problem.' You're nothing but a bigot. You're on the list now."

If you have talked to the two other defenders, Hloval will have a bit of information about them as well. On Desideratus and his rag doll, Hlovel will hatefully comment: "You mean that stupid doll? I think he's been blessed a little too well by Lord Sheogorath. He's on the list. Not first though. Definitely not first." When asked about Althel and her missing arrows, you will find out that armorer Bat gro-Orkul is first on Hlovel's list: "It's that fool Bat gro-Orkul. He thinks his armory is more important than the town or our lives. He's first on the list. Oh, yes! First."

It is possible to solve Hloval's stunted magicka in two ways: either give him a set of ghostly welkynd stones or provide him with the Dagger of Depletion. If you give him the stones, he will say: "The sacred stones! You've desecrated them with your touch. You're on the list for sure now. I would never have allowed myself to do that. However, now that they are befouled, I can use them. You may grovel in gratitude at my feet later." He will then add: "Ugh! These welkynd stones taste terrible." If you choose to give him the dagger, he will start looking for a potential source for magicka: "Yes! Yes! I can use this to charge my magicka. All I need is a source...someone nearby...someone with magicka. Someone on the list! ...Someone like you! No need to thank me for letting you give me your power. I deserve it, after all." He will then stab you with the dagger, draining all your magicka, and add: "A little stab in the back won't hurt too much. Then I'll have the magicka I need." After this, his last words to you will be: "They doubted my power. Now they'll see!" He will then finally be able to cast spells, thus killing one of the invading Fanatics.