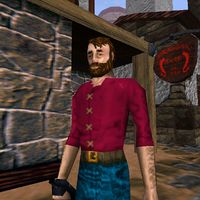 Crendal outside the Draggin Tale

Crendal is a Breton drunk who hangs around the Draggin Tale Inn. He is not a reliable source of information, but can lead you to a map piece he stole from Trithik. This is part of a map that reveals the location of the Flask of Lillandril.

If you ask Dreekius of anyone in particular looking for the flask, he informs you that Crendal was bragging about having a piece of the map. Crendal claims the barkeep is lying, but Cyrus easily tricks him into confirming he does have the piece. According to Crendal, he passed out one night on Trithik's boat and woke up early; looking for a drink, he found the map piece under the old sailor's cot.

You can trick Crendal into checking his hiding spot using Trithik's description of the map piece. After this, he refuses to talk to you and waddles over to his hiding spot in the park. The leather pouch containing the treasure is buried next to the tree in the southwest corner, but will not appear until he goes to check it. Once he returns to his usual roaming area, you can speak with him again.

"Whoa! Eeeee-zee, mate! Guy could get hurt with that thing!"

"Hey! Stop following me!"
"Hey! Can't a guy have some pu-pu-pu-plivarcy"

"She floats through my dreams, with the greatest of ease... The fat, one-eyed lady with sweet-smelling knees..."
"Ey! Redguard! What about a drink?"

He will also sing this song:

"'A' is for the apes that date their mothers"
"'B' is for the boils they pop for fun"
"'C' is for the waters sailors sail on"
"'D' is for the lumps upon their tongues"
"'E' is for the eels they eat for breakfast"
"'F' is for the fleas that swarm within their shorts"
"'G' is for the grog they swill by gallons"
"'H' is for the hairs upon their warts"
"'I' is what they poke out with their fingers"
"'J' is for the jerks they give on ropes"
"'K' is for the kats they drown in bags"
"'L' is for the love they give to goats"
"'M' is for the marks of fifty lashes"
"'N' is for their smarts, for they have none"
"'O' is for the oceans they get lost in"
"'P' is for their pox and scurvy gums"
"'Q' is for the quakebutts fit for pounding"
"'R' is wrong, and wrong they'll always be"
"'S' is stinky, just like sailor's armpits"
"'T' is for the ticks that eat their fleas"
"'U' is for the urgent needs of manhood"
"'V' is for the vegetables they won't eat"
"'W' for weevils in their hardtack"
"Three letters and the alphabet's complete"
"'X's mark the spots on all their mapses"
"'Y', oh, why! We cry, must our song end?"
"'Z', the zoanthropic girls of our hometowns"
"Now let's sing the whole damn alphabet again! (Ta-da-dah)"

"Change you into what? How the hell am I supposed to do that? Yer bad enough as it is!"

"You seen a woman named Iszara around?"
"Sure I have! Not that I remember names though...Oh, but they remember mine. Dem broads love Crendal...Have my way with em all, ya know, hee hee."

"What do you know about the group called the Restless League?"
"Dem punks. Killed em all once I did. Bunch a Redguard pansies..hick...They want me to join em, but I got too much thinkin to do..Heavy load, I saaay! Richton's got it out for them. You watch out."

"So, Stros M'Kai's one big party for you, eh?"
"Gotta drink to keep sane in this place. Dem sissies round here think they can make the best of it. They makin nothing. Nooaathing. Richton's got em all scared."

"You've certainly spent a lot of time at the local tavern."
"Richton's got that damned lizard, Dreekius, charging three gold pieces for lousy Valenwood wine! He freaks me out...Picking flies off the bar with his tongue. I can't relax with that ..hick...(slap), (slap), going on."

"Richton doesn't have you scared?"
No sir. I kicked his fat butt. Not throwing me in his catacombs!

"You're scared of the Catacombs, eh?"
"Didn't say that. Did. Not. Say. That. Richton throws the Crowns in jail, and pirates into the Catacombs. I ain't neither. Doubt his cronies could take me anyway."

"Just like a drunk to blame the bartender for his troubles --"
"Pahh! Who the (hick!) do you blame for yours, tough guy? I know Dreekius' story...Just no one else does. Damn Argonians...! Dem Darkelves got it right: cage em up and let em hawl [sic] ash!"
"Don't like Argonians either? Who do you like Crendal?"
"Fine, then. Hang 'round that scaly bastard an' catch the flu --"
"There hasn't been a case of that in two hundred years."
"All I'm sayin', those of us play our cards right could open a right-good belt shop."

(Unlocked after quest Escape the Catacombs)

"Any ideas on how to contact the Restless League?"
"Here's an idea, Redguard...tie a gold chest around your ankle and sink yourself."

"Dreekius tells me you've found yourself part of the Flask of Lillandril map."
"Oh, he did, did he? Uuhhh..well...uh...he's lying! Yup, that lizard's lying!"
"Of course, he's lying. You're not bright enough to have gotten a piece of the map."
"What? I'm brighter than you, Redguard! I do have a piece of the map. Hah! How's that! You didn't think I (hick) did!"

"That's impressive Crendal. How could I have doubted you? Tell me...how'd you get it?"
"Shh. Hick. You'll like this, question boy. I passed out one night on old Trithik's boat, while he was sleeping. Woke up early, lookin for a drink...
"And what do I find under his cot...a piece of the map! Haaa. Uhh. Shhh. He probably doesn't even know it's gone."

(Unlocked by "Have Map Piece")

"I'll gladly take that map piece off your hands if you're not using it. Perhaps a trade?"
"Pah! You have nothing I want, Redguard! Plus I don't even have it on me, I've hidden it away where them sissies can't find it."

"I have some info that may concern you Crendal. I heard some boys talking that they had found your hidden map piece."
"That's impossible. Pah. Hick! They just talking, jealous of Crendal they are. They couldn't know where it is!"

"I'm not so sure of that. I overheard them say it had two numbers on it, an X, and long tree. Didn't mean much to me, but I'd check your hiding spot if I were you."
"What! What! I mean..what. Ummmm. Damn them. Uhh. Another lie. Now go away Cyrus."

Due to an oversight in dialogue scripting, Crendal will not say the following line while going to check his hiding spot:

Another oversight in the scripting prevents him from idly saying this line:

He had a second line for the "Trade for Map" topic, revealing grand plans for the future:

"And when I do use it to find the flask, Richton and those League rats will be bowing to me, and that lizard is going the way of the Prince."