Does this place actually exist? I found a map of Balfiera Island, but I'm not sure it's actually seen in the game. As for the fort, it's worth noting that the ONLY result on Google for "Fort Balfiera" is this page. (When was the last time you searched for something on Google and got exactly 1 hit?) I somehow don't believe that we'd be the only ones to know about this place. My instinct is to remove that entry. — TheRealLurlock (talk) 05:41, 1 April 2014 (GMT)

I don't have the game to verify this, but the walled, water-encircled settlement directly east of the Gate of Mnem on the ESO map appears to be Bravil. Can this be confirmed (the map doesn't make it clear if the settlement is even accessible), or should I take from the lack of an entry on the map to-date that it's just a piece of in-game scenery with no way to identify it? Croaker (talk) 05:41, 7 April 2014 (GMT)

Places from Oblivion not marked on the map[edit]

In Cyrodiil you can find many places from Oblivion that are not marked on the map in any way; instead their name shows in the top right of the screen when you visit them. Some examples include the Ayleid ruins of Kemen, Rielle and Anutwyll or Forts Scinia, Magia and Urasek (as "Scinia Ruins", "Magia Ruins", "Urasek Ruins" etc.) Should those places be mentioned, and if so - where and in what manner? - Vordur Steel-Hammer (talk) 23:04, 27 August 2014 (GMT)

There's a load of places in Cyrodiil that have no map indicator, including a bunch of area names (Colovian Crags and Western Shore spring to mind). Compiling a general list of these names would probably be a good idea, with a bit of detail on where they are, then we can decide what to do with them. A few, like the ruins you mention, may get their own pages, while some of these that are just names of areas will probably be mentioned in passing on the subzone pages. --Enodoc (talk) 08:35, 28 August 2014 (GMT)

Good idea. I'll try to collect as many names as possible (at least in the Pact territory) when I'm in Cyrodiil. Then I'll post them here and perhaps make a rough map of their locations. -- Vordur Steel-Hammer (talk) 13:53, 28 August 2014 (GMT)

Sounds good. I'll do the same starting with the Covenant territory. I'm also mapping them as I go (roughly, some of them seem to be quite small and I may miss them by accident), so we can compare later on as we cross into other territories. --Enodoc (talk) 14:13, 28 August 2014 (GMT)

I spent the weekend running around Cyrodiil looking for as many of these places as I could find. The ones I have found are listed at User:Enodoc#Cyrodiil 2 if you'd like to compare with your findings. I'll upload the map as well soon. --Enodoc (talk) 13:05, 1 September 2014 (GMT) 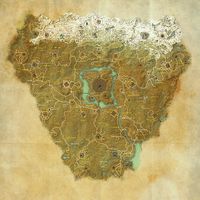 Nice work. I mapped the EP territory a few days ago and I see that you have found all the places that I did, so there's no need for me to add anything. If I ever stumble upon something new (unlikely, judging from your precision) I'll post it. Vordur Steel-Hammer (talk) 21:37, 3 September 2014 (GMT)

I've updated the zone's level range, which now has a small section detailing the specifics. If it wasn't bad enough that the enemies in Cyrodiil were changed to VR5 some time back, 2.0.2 has now (apparently) bumped them up to VR12. I imagine a lot of pages will need updating with this information. —Legoless (talk) 20:00, 5 April 2015 (GMT)

Yeah that's irritating. I think it's only NPCs and enemies that will need updating, as I've been trying to keep the level off anything else Cyrodiil-related. Maybe we should template it so only one thing needs to be changed if they alter it again (btw, I added "10+" to the infobox, so that it can still be seen at a glance). --Enodoc (talk) 20:33, 5 April 2015 (GMT)