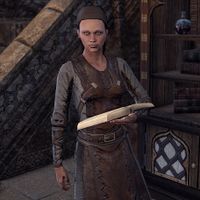 Zohreh is a Redguard bookseller and scholar who can be found at her shop in Bergama.

Before starting The Scholar of Bergama, she will start to tell you about her research before stopping herself:

"I see you there, but you must wait. A scholar's work is seldom urgent, but I have a request from the king himself. It seems the Ansei Wards have been misplaced!
Wait, I should not have …. Um, just forget I said that."

After Restoring the Ansei Wards, she'll be back in her shop where she seems to have forgotten about the fate of Shiri:

"Where is Shiri? She should have been back days ago!
I never should have taken that girl as an apprentice. Untrustworthy! There is something very sneaky about her."

Throne Keeper Farvad will bid you to meet with Zohreh about possible locations of the remaining Ansei Wards. She can be found in her store, busily doing research. Once you've started the quest, you can tell her:

After you have met up with her, she will explain the current status on the search for the other Wards.

"So now we just need to find the other two wards. My apprentice Shiri is traveling with Prince Azah, trying to find answers, but they need my research.
Let me work. I will ensure you are notified when we know more."
How do you expect to find the answers in a book?
"It seems the power of the Ansei Wards is somehow linked to the lives of the Ansei who created them. By learning about the Ansei, I hope to get an idea of where the Withered Hand may take the wards.
Now, leave me to my work."

While traveling back to Bergama, Shiri will have gone missing with the two recovered Ansei Wards. Zohreh will relay via Captain Rawan that Shiri may have gone to Satakalaam to visit her cousin Nahirah. When you arrive at Nahirah's home you will find the woman dead and after some investigation you will come to an unpleasant conclusion. Zohreh will then arrive inside the home, being shocked by what she sees.

"What happened here? This is terrible. Did the Imperials do this?
I hope Shiri was not here. Did you find any evidence that she visited?"
Shiri is the sister of Uwafa and Alasan.
"The leaders of the Withered Hand? But that would mean … Shiri is one of them too? A necromancer?
You think … tears of Zeht! With that text … and we have no idea where she is!"

Afterwards you can question Zohreh more about Shiri's possible plans:

"This is … unthinkable. Shiri came to me only a few months ago, but she seemed so dedicated. Of course she was! She was studying the Ansei Wards …! How could I not have seen this?
I hope we find her before she does something … terrible."

What do you think Shiri is planning?

"I-I just don't know. Her brothers are dead and we have recovered two of the Ansei Wards … does she have the third?
Is the Withered Hand now under her command? Was it all along? There are so many questions. I will need time—time we don't have."

Any guess where she might have gone?
"I-I'm not sure. Perhaps the Motalion Necropolis?
Her father's remains are there … yes, that may be where Shiri has gone."

How do I get there?

How did you get past the Imperials?

"It was not easy. I had to sneak by the Imperials, but I was worried about the book Shiri was carrying. I was worried the Withered Hand would get their hands on it.
Unfortunately though, it seems they already had it."

Zohreh is present at the ceremony in the Impervious Vault during Restoring the Ansei Wards.

"I still feel like such a fool. To have shared my knowledge with that evil girl, and the whole time ….
I am very grateful that she is no longer a threat. If things had not turned out this way, I don't know if I could've forgiven myself."