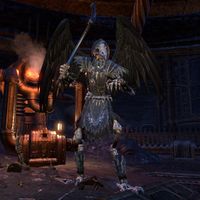 A Wraith-of-Crows (or Wraith of Crows) is an otherworldly creature composed of several daedric crow-like entities which create a semi-humanoid skeletal figure. It possesses both physical and magical attacks.

One of them is summoned during Lost in the Gloam by the Shadow of Sotha Sil, and another is fought in the Mines of Khuras during Through a Veil Darkly. A number of generic wraiths are encountered in the Crystal Tower and Evergloam. Three unique Wraith-of-Crows can be found behind the portal at Exarchs' Egress.