The UESPWiki – Your source for The Elder Scrolls since 1995
< Elder Scrolls Online: Places: Cyrodiil / Milegates(Redirected from Online:Winter Gate)
Jump to: navigation, search 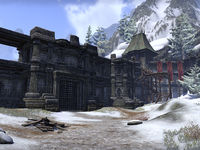 Kingscrest Milegate is an Imperial milegate in northeastern Cyrodiil, northwest of Kingscrest Keep, on the border between Pact and Covenant territories. The gate is one of four passages through the hill range, and one of three which can be destroyed. It acts as a bottleneck between the territories, which may result in occasional skirmishes between factions. It is a prime location for setting up ambushes against players traveling between Kingscrest Keep and Fort Dragonclaw, and can be destroyed by Siege Weapons to prevent passage. Access to the top of this gate is available from the east side, while entering through the portcullis is the only access from the west side. If the portcullis is destroyed but the scaffolding to the top remains intact, the gate can still be used for east-to-west passage only; the scaffolding must also be destroyed to prevent access completely. The portcullis and scaffolding can be repaired with Bridge and Milegate Repair Kits, available from Siege Merchants.

This Elder Scrolls Online-related article is a stub. You can help by expanding it.
Retrieved from "https://en.uesp.net/w/index.php?title=Online:Kingscrest_Milegate&oldid=2100225"
Categories:
Hidden categories: