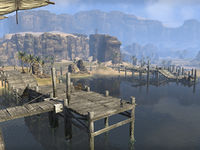 Wayfarer's Wharf is a dock located in northeastern Sentinel, in the Alik'r Desert. From here, it is possible to take a ship back to Wayrest in Stormhaven. Fahima's general goods store is located south of the wharf, near the gate back in to the city proper. A chest can spawn behind her tent. There is a stable across from the store. One camel, two horses, nine goats and four chickens reside here. A copy of the lore book, The Cantatas of Vivec, is located against the northeastern exterior of the stable.

There are many Ra-Netu along the coast west of the wharf, between the wharf and the Sentinel Docks. There is a tunnel there, which leads into Sentinel, and ends up at The Forebear's Forge. The Spearhead is docked to the north of the wharf. A chest can spawn on the western end of the galleon.

A shrine to Tu'whacca lies southeast of the wharf. A copy of the lore book, The Cantatas of Vivec, is located next to a rock formation west of the shrine and its keepers.