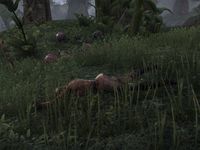 Vicious animals have been encroaching on the Temple of the Eight

This quest can be obtained once a day by talking to Breda, south of Windhelm. She will give you one of 9 quests; you can abandon a quest and get a new one from her to get a different one.

Travel to the Temple of the Eight, west of Elden Root. Once there, talk to Ormurrel:

"Another on the War Orphan's Sojourn? Though Stendarr provides for all lost children, we will not turn away donations for our charges."
Other than donations, what can I do to help?
"Ah, yes. Some of those who walk the War Orphan's Sojourn are far less capable than yourself. The creatures alerted to their passage see them as a fine meal.
Aggressively dissuading these creatures would help clear the path. If you're so inclined."
How do I donate to the war orphan fund?
"I can assist you with that. Anything you can donate will help. We must keep our charges fed."
All right. I'm ready to donate. [Give gold]
"What grace. Stendarr smiles upon those who help lost children. Today, he smiles upon you."

You have a choice of donating a leveled amount of gold how much per level?, or killing the surrounding animals. You can choose to do the other option as an optional objective, but there is no additional reward from doing this. Animals usually spawn around the temple, allowing for easy kills to satisfy the objective. Once you are finished in Grahtwood, return to Breda:

This quest is associated with the following achievements:

Notes
* Any text displayed in angle brackets (e.g., <Alias=LocationHold>) is dynamically set by the game and will be filled in with the appropriate word(s) when seen in game.
Retrieved from "https://en.uesp.net/w/index.php?title=Online:War_Orphan%27s_Sojourn&oldid=2399037"
Categories:
Hidden categories: