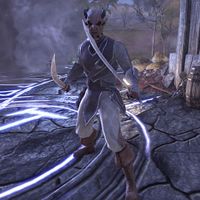 Velehk, also known as Velehk Sain, is a Dremora pirate that can randomly appear at a Dark Anchor when the final pinion emerges. An achievement is earned by banishing him. He can drop the rare Abecean Pirate King's Armor.

When he is summoned to defend an Anchor, Molag Bal will announce "He'll tear you open and eat your heart raw. His eyes gleam red, and his heart will never thaw.", or "Blood on the Water, Velehk this way comes. Your doom is upon you." Both of these are quotes from Pirate King of the Abecean.

There is one achievement associated with this creature:

This Online-related article is a stub. You can help by expanding it.
Retrieved from "https://en.uesp.net/w/index.php?title=Online:Velehk&oldid=2100788"
Categories:
Hidden categories: