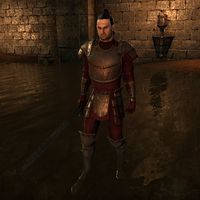 Varaine Pellingare is a Breton noble who, along with his sister, is the leader of a potential coup in Wayrest. Their forces have been preparing down in the Wayrest Sewers. 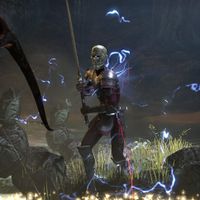 Varaine Pellingare returned from the dead

Varaine Pellingare is killed in Wayrest Sewers I, and as a result, his mourning father made a deal with Investigator Garron to have him raised from the dead. He returns in the final battle of Wayrest Sewers II, fighting alongside his sister. He will use a variety of melee attacks, while Allene uses ranged attacks.

Smite
Spinning Cleave
Deals physical damage and knocks you back.
Tidal Slash
Varaine disrupts the water, which flies outwards in a conal radius.

If your group is wiped:

After he is killed his final words are:

Varaine Pellingare: "Who … are you?"

As the battle with the lich ensues, Master Pellingare will escape but can caught up with in the cavern where his children first died. He can be heard beseeching his children to speak with him.

When one of the siblings receives a damage shield, Allene and Varaine will engage in banter.

This Online-related article is a stub. You can help by expanding it.
Retrieved from "https://en.uesp.net/w/index.php?title=Online:Varaine_Pellingare&oldid=2085112"
Categories:
Hidden categories: