The UESPWiki – Your source for The Elder Scrolls since 1995
< Online: Quests: Summerset / Side Quests
Jump to: navigation, search

I met a keeper of the Royal Menagerie in Sil-Var-Woad. He warned me that dangerous animals have escaped into the park grounds, but he is searching for a tame indrik that may have escaped during the chaos. 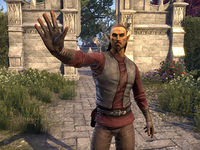 "You've picked a bad day for a stroll in the park."

When you approach Sil-Var-Woad, you'll be greeted by Talomar, who tells you of the Royal Menagerie and its current predicament. the Royal Menagerie is a zoo, and the animals have broken free. Talomar is looking for Lotus, an indrik that was given to Queen Ayrenn as a gift by her father when she was young. Lotus is the Menagerie's pride and joy, and Talomar is her favorite keeper. Talomar wants to make sure she's safe, and enlists you to help him find her.

Your first task will be to enter Sil-Var-Woad and head east, where you'll find a mammoth that smashed its way through a limestone wall. Examine the corpse and take a few Mammoth Tusk Shards, then show them to Talomar. It's not normal for the Menagerie's mammoths to bash their heads against walls until they die. They've tested their boundaries before, but not like this. Head through the hole in the wall and climb over the bent bars of the enclosure on the other side. Make your way southeast, to Lotus's enclosure. In the southern corner, you'll find a pile of Tainted Feed. Talomar mentions that there's no sign of Lotus, and that feed this tainted shouldn't have gone past their inspections, but he is adamant that it couldn't have been poisoned by a fellow keeper.

Find out why the Royal Menagerie has descended into chaos

You'll find Elise Mallon, cornered by lions. Kill the lions and speak with her. She thanks you for assisting her, and tells you that she thought she saw Lotus taking a drink at the reflecting pool. However, Lotus is skittish, and fled the moment she saw Elise. When you ask her to join your search, she refuses and runs off. Head south towards the reflecting pool. Talomar spots Lotus and runs after her. Follow the pair around the Conservatory, all the way to the northern edge of the zoo.

Conservator Vinelore and her rangers arrive as you get there, and she is not pleased. Talomar calms Lotus, and the Conservator assures you that she and her rangers have Lotus under control. They're going to take Lotus to the inner paddocks, where she'll be secure until the chaos blows over. She believes the stampede is the result of an act of sabotage, and tells Talomar to escort you off the grounds. As you're about to leave, you're approached by Elise, who looks like she has something to say to you.

Elise tells you that she's an Eye of the Queen, charged directly by Queen Ayrenn with keeping an eye on Conservator Vinelore. The Conservator doesn't seem to like Elise, and has prevented her from rising in the ranks at the Menagerie, so Elise got creative and poisoned the feed, causing the animals to go berserk and break free of their pens. She is using the chaos to continue her investigation unimpeded. She tells you that there are entire sections of the Menagerie that are off-limits to keepers. Any animals taken back there are never seen again. Elise believes the Conservator is up to something sketchy. Elise wants you to help her find evidence of corruption or wrongdoing within the Conservatory.

Search for evidence of corruption in the Conservatory

Before you can make any progress, you'll need a way into the Conservatory. Find a Conservatory Key by searching the corpses of Dead Rangers around the complex, then enter the building. Begin your investigation of the Conservatory. You'll find a great deal of slaughtered animals and notes here, but the most important is upstairs. Read the Serum Infusion Report on the western bookshelf (next to the table with a large pile of light blue-green ash on it), then speak with Elise. These notes are all the evidence she needs to prove to the Queen and her Proxy that cruel experiments were performed at the Royal Menagerie. After your conversation, a commotion occurs. Head on outside to the Paddock with Elise.

Enter the Paddock, where Talomar is confronting Conservator Vinelore. Elise tells you to distract her for a minute, as she has an idea. Conservator Vinelore admits that she's been conducting experiments on indriks. They are revered as beings blessed by the gods just as the Altmer are. She wants to maintain the Altmer's "natural primacy", and claims that the other races need a natural predator to curb their populations. The Conservator intends for this predator to be the indrik, calling them her "immortal Aedric avengers". Just as she finishes her monologue, Elise finishes breaking the wards on the indrik enclosure, allowing them to run free. 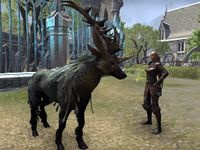 The Conservator shoots Talomar with an arrow before fleeing into the Paddock. Elise is staying behind to tend to his wounds. Meanwhile, you need to finish this business with the Conservator and free Lotus. Elise gives you her Ward Breaker so you can bypass any barriers the Conservator tries to throw in your way. Pursue the Conservator into the Paddocks, where she injects Specimen II with a serum that has yet to be tested on live subjects. The indrik is empowered. Kill the Conservator and her beast. Lotus is cowering in a pen near the Conservator's corpse. When you free her with Elise's ward breaker, Lotus recognizes you as non-threatening and opens a portal for the two of you to escape with.

Find Elise and Talomar outside and speak with them. Talomar is overjoyed to have Lotus back. Now, you need to make a decision. Talomar is conflicted as to how he wants to proceed. The Royal Menagerie is technically defunct, but he could rebuild it and make it a nature preserve. Alternatively, he and Lotus could leave and do their own thing. Regardless of your decision, you are rewarded for your role in stopping the Conservator's grim experiments.