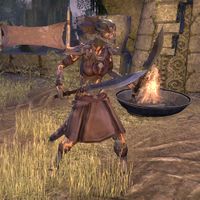 Tree-Minder Na-Kesh is the leader of the Argonian Xit-Xaht tribe. She is responsible for tending the mad Hist at the Ruins of Mazzatun, and is performing cruel alchemical experiments with amber plasm. She serves as the final boss of the dungeon.

She has a chance to drop Mazzatun Style pages on Veteran difficulty, with a guaranteed drop from Hard Mode and a 50% chance for a page to drop from non-Hard Mode. She has written a journal, and wears the Amber Plasm skin.

As a boss type enemy, Tree-Minder Na-Kesh is immune to all crowd control effects. 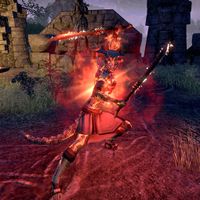 Slash
A basic melee attack that deals minor physical damage.
Whirling Blades
The boss spins around dealing moderate physical damage to all players around her. This attack is very fast with no telegraph, so be prepared.
Bark Breaker
A charged heavy melee attack that deals high physical damage and knocks back the target. This should be blocked or dodged if possible.
Root Slam
Na-Kesh calls roots from the earth to slam into her target in front of her, with a conal AOE that deals mild physical damage.
Lashing Vines
The boss charges up and summons vines to hit her target, dealing moderate physical damage as indicated by a red cone in front of her. She will turn to track her target as she is casting this, so the tank should stand still to avoid hitting other group members.
Summon Siphoning Totem
The boss summons a Siphoning Totem near a target that initially drains resources and health from them only. The totem must be killed as quickly as possible as the siphoning speed will increase over time, together with multiple players getting siphoned at once. She tends to summon the totem at the start of the fight and every time Hist Hallucinations occurs.
Hist Hallucinations
The Tree-Minder targets one player and throws Amber at them, causing them to hallucinate. This makes the statues on the edge of the arena glow and the affected player's vision to go blue. The affected player will see Avatars of the Hist statues all around the edge of the arena. While targeted, all your skills and light attacks are replaced with a ranged sap ball attack. You must find the correct Avatar and use your light attack to destroy it. Your allies can activate a synergy to reveal the real avatar on normal, but on veteran hard mode, you need to communicate to find it. A good strategy without using voice communications is for the tank to run over to the real one, which will be glowing for those with normal vision. The achievement Blind Luck can be earned by not using the Reveal synergy to find the Empowered Tree-Minder Totem.
Amber Rain
During Hist Hallucinations, amber will fall from the Hist above, dealing moderate magical damage as indicated by red circles. Sticky Situation Savvy can be earned by having no group members hit by Amber Rain during this fight on veteran difficulty.
Summon Adds
A wave of archer Xit-Xaht will spawn every time Hist Hallucinations is cast and should be killed as fast as possible. On hard mode, Stoneshapers and Root-Masons are summoned as well and are high priority targets for the group.
Hist Throw
Na-Kesh throws a glob of Amber onto the ground that creates a Hist Pool, which adds can run into. This empowers the adds causing them to deal more damage and be immune to crowd control. One player should run into the Hist Pool to grab it so the adds can't step into it. This is especially crucial during hard mode when Stoneshapers appear as an empowered Stoneshaper can easily wipe the group with its uninterruptible boulder throw attack. The player that steps in the plasm will have moderate magical damage over time, which can be healed through fairly easily.
Amber Projection
Na-Kesh will summon an amber shade of Mighty Chudan at 75% health and Xal-Nur at 50%. The boss is stunned while the shades are alive and cannot be attacked. Do note there is no time limit for killing the shades, and players can use these phases to charge ultimates or recover resources if needed.
Thorn Scourge
At 25% health, Na-Kesh enters execute phase, wherein she causes vines to erupt in all directions in an alternating pattern, dealing moderate physical damage as indicated by large red cones. It is advised to save ultimates to burn the boss down fast during this phase as dealing with totems/adds together with the constant AOEs can be overwhelming. 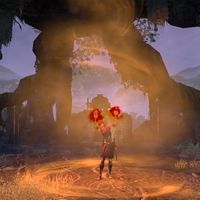 Na-Kesh will first appear after Chudan is killed:

Heem-Jas: "I am here! You draw its attention while I … oh. Well, good job. I guess."
Tree-Minder Na-Kesh: "Muck-dwellers! What have you done?"
Heem-Jas: "It is Na-Kesh! We have killed your pet. Release the rest of the Su-Zahleel tribe, or suffer the same fate! That was good, right?"
Tree-Minder Na-Kesh: "No. No, I think not. Xal-Nur prepares your elders for sacrifice even as we speak. Their blood will water the roots. As will yours."
<Na-Kesh leaves>

The Tree-Minder will be seen again in the chamber where the Su-Zahleel elders are being kept.

Tree-Minder Na-Kesh: "Idolent! Worthless! The Xit-Xaht do not suffer weakness. Drench the elders. Kill the invaders!"
<She then leaves the chamber.>

When approached, she can be heard praying to her Hist.

When combat is initiated, she turns toward the group and vows to end your quest.

While summoning a totem, she shouts at the group members close to her. This dialogue is ambient and has no subtitles.

While dousing a player with Amber plasm to initiate Hist Hallucinations, the tree-minder asserts that the group is bound to fall before the will of her Hist. This dialogue is ambient and has no subtitles.

Na-Kesh calls out to her pet when the Phantom of Mighty Chudan is summoned.

The tree-minder orders the Phantom of Xal-Nur to destroy the group when it is summoned.

While entering the last phase of fight, she calls upon writhing roots in a last ditch effort to dispose of you.

Tree-Minder Na-Kesh shows immense will to fight on as she dies.