Online: The Seal of Three

The UESPWiki – Your source for The Elder Scrolls since 1995
< Online: Quests: Ebonheart Pact / Deshaan
Jump to: navigation, search

A large Maulborn force used the sewers to sneak into Mournhold. I need to find them before they can complete their nefarious plan. 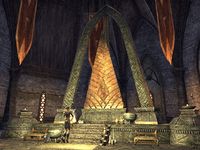 Almalexia looks upon her own shrine

The small group of Maulborn escaped from the Mournhold Underground. Almalexia needs you to report to the Tribunal Temple right away. She is floating outside the temple, near where you met Naryu Virian during A Favor Returned. The Maulborn entered the temple and opened Daedric portals. Almalexia sends you to banish the Daedra while she finds out what the Maulborn are up to.

There are three Daedric portals to close inside the temple. After they are closed, pray at Almalexia's altar in the southwestern corner of the temple. She says Magistrix Vox used Daedric magic to bypass the wards around the High Chapel, then opened an Oblivion gate to fill the temple with Daedra. Vox wants to desecrate the temple, steal the holy artifacts and loose Daedra on Mournhold. In order for you to enter the High Chapel, you need the blessing of each of the Three. You have Almalexia's blessing, so now you need to pray at Vivec's and Sotha Sil's shrines and complete their tasks.

Vivec's altar is in the southeastern corner of the temple. Almalexia appears and explains the trial to you. Vivec's trial measures your wisdom and judgement. A temple worker, Vamen, killed Belronen Telvanni in a duel. You must act as Vivec did, questioning the witnesses and determining who truly slew Belronen.

First, talk to Vamen. A small cut on Telvanni's arm was enough for Vamen to win. You can choose to blame him, or continue looking for a culprit.

Telvanni's body has one wound: a small cut on his arm. There is a crumpled note in his belt. It looks like someone called V threatened to turn Telvanni into the temple for his trade in Daedric artifacts.

Once you accuse one of them, the spirits fade, and the Enigma of Vivec will appear. Vivec rewarded Fenila Redoran for her cunning, but House Redoran suffered for poisoning a Telvanni. Morami Hlaalu was the one punished for the crime, but House Hlaalu was rewarded for exposing a heretic.

Sotha Sil's altar is at the north end of the temple. Almalexia says Sotha Sil values intelligence and ingenuity.

Your goal is to repair the Dwarven Arbiter of Perfection. Turn the left Dwarven mechanism two or three times and defeat the three Dwarven spheres. Each Dwarven sphere drops two or three dynamo cores. Since you need five, you need to turn the switch at least twice. Turn the right Dwarven mechanism, and a Dwarven spider will appear. Defeat it and collect the three spinning gears it drops.

Interact with the Arbiter of Perfection, adding five dynamo cores to the sockets and three gears to the pegs. Once complete the Arbiter will attack. Defeat it, and the Enigma of Sotha Sil appears. Perfection is unattainable, the Enigma explains. 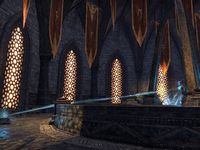 Inside the High Chapel

Inside the chapel is Maulborn priest Sathram. You need to activate the Relics of Almalexia, Sotha Sil and Vivec in that order (Almsivi) to be able to reach him. Defeat him, and exit the temple. Talk to Almalexia just outside the doors.

The Maulborn sacrificed their own troops so Vox could escape with the Judgment of Veloth. Almalexia names you one of her Hands and gives you a reward and 1 skill point.

This Online-related article is a stub. You can help by expanding it.
Retrieved from "https://en.uesp.net/w/index.php?title=Online:The_Seal_of_Three&oldid=1998041"
Categories:
Hidden categories: