The UESPWiki – Your source for The Elder Scrolls since 1995
< Online: Quests: Southern Elsweyr / Story Quests
Jump to: navigation, search
The Order of the New Moon plans to attack Pridehome, a reclusive temple dedicated to the worship of Alkosh. The Dragonguard is determined to stop the cult's assault and uncover the motives behind the attack. 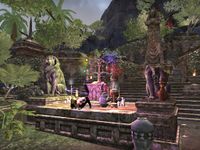 Gain entrance to the Halls of the Highmane

Head into Nahfahlaar's Chamber and tell him about the attack on Pridehome. He begrudgingly agrees to meet you there. Now that you have his assistance, travel to Pridehome, located east of Black Heights in the Tenmar Forest.

The cult has already begun their assault on Pridehome. Find Caska in the eastern portion of the grounds and see if she's found anything. She calls you over to read an excerpt from the Clan Mother of Pridehome's writings. Pridehome is home to the Pride of Alkosh, warriors born under the eclipse who protect Elsweyr when they're needed. Za'ji ran west when he heard the sound of bells. He's found a letter from his mother addressed to the Clan Mother of Pridehome, talking about a champion and a demon from the east. He can't tell you much, but he does know the story of an ancient warrior from the Pride of Alkosh whose corpse was cared for by his mother's temple long ago. Aeliah is in the northern section of the complex, tending to an injured Moon-Priest. Speak with Moon-Priest Nuziwa.

Nuziwa tells you that if the order came here for anything, they came for the Clan Mother. When the Order of the New Moon attacked, she hid in the main temple. If she's still alive, she'll be there. He begs you to find the Clan Mother before the cult can kill her.

Head west towards the temple and enter the greater complex. Cross the bridge and climb the stairs up to the temple. The Clan Mother is gravely wounded, and tells you about the Mask of Alkosh before she dies. Sai Sahan is delivering the grave news outside when Nahfahlaar lands nearby. Speak with him. When you ask him about Ja'darri, he tells you to speak with the Clan Mother of Khenarthi before flying off to deal with Laatvulon. Caska doesn't want to deal with Za'ji's moaning, so she sends Aeliah with you to talk to Clan Mother Tadali.

Clan Mother Tadali confirms that the clergy at her temple once interred the remains of Ja'darri long ago. When you tell her you seek the Mask of Alkosh, she tells you of a place called the Halls of the Highmane. The halls are located south of Khenarthi's Breath Temple. Head on down the hill and cleanse the bells the same way you did when you brought Za'ji's stolen bell back to his mother. 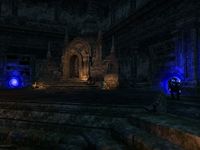 To cleanse the bells, you need to ring them in the following order: red, yellow, blue, green. The red bell can be found on the lower section to your right (facing the Mane), yellow can be found on the upper left platform, blue on the upper right, and green on the lower left. When the bells are cleansed, the Clan Mother appears. Answer her questions and allow Clan Mother Tadali to perform the ritual to grant you passage to the trials, then enter the Halls of the Highmane.

The first trial requires you to use the grappling bow to cross the chasm on the Path of the Winged Goddess. Step onto the central platform and grapple to the left. Grapple upwards, then follow the path across the chasm. Keep an eye out for grappling points over the cliffs. This path is fairly straightforward.

The second trial is on the Path of the Moon Prince. Light the four braziers; there one in each corner of the room. When you light a brazier, portals from the Dark Behind the World will open up, sending dro-m'Athra to contest you. Light the four braziers and defeat the dro-m'Athra that appear to progress through the Path of the Moon Prince. Pass through the Inner Halls once the second trial is finished. The Highmane Guardians protect the Inner Halls. Kill them as needed and pass into the Path of Pride, where the third trial awaits.

The third trial is a puzzle involving Sliding Stones. There is a Sliding Stone on the entrance platform. Push it east through a gap in the wall then give it a tap to the north to push the panel down. The northern gate below will open. Jump down and pass beneath the arch the open gate was guarding to find another sliding stone. Push that stone south to a panel to open the southwest gate. Past that gate is yet another sliding stone. Push it west through the gate then north onto another panel. Aeliah will remind you of the stone up top. Look upwards and use the grappling bow to get back up to the entrance platform. There is a panel next to the grappling point you used to get back up. Use the Stone Reconstruction synergy on the spot next to Aeliah that's glowing blue, or push the top cube back to where it was before you moved it. From there, push it north towards the ledge, then push it west onto the panel obscured by a wall. That will open the western gate on the lower level. Previously, you pushed a sliding stone close to that gate. The stone is south of the now open doorway. Walk over to that panel and push that Sliding Stone north, then push it west through the gateway. When it's through the gate, push it north onto the final panel to open the way to the Hall of Guardians. 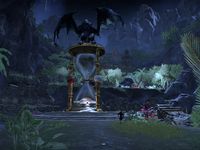 After you read the inscription on the statue, Ja'darri appears. She says that only one of you can claim the Mask of Alkosh before disappearing. Aeliah says she should probably leave as a result. Instead of reporting to Sai Sahan, she's going to go to Senchal and recruit the Shields of Senchal to aid you in your efforts. Walk past the statue and enter the Walk of Ancient Kings. Laatvulon is here, and he summons frozen boneflayers, skeletal archers and soldiers to combat you as you climb up towards the Mask of Alkosh's reliquary.

Ra'khajin is already here. When he sees you, he engages you in combat, claiming to be the true heir of the mask. Kill Ra'khajin, and Laatvulon decides that you've been enough of a problem. Before he can kill you, Nahfahlaar swoops in and hits Laatvulon with a blast of fiery breath, issuing him a challenge as he flies off. Laatvulon flies away in pursuit of Nahfahlaar, leaving you to take the mask from its reliquary. Report back to Sai Sahan with the Mask of Alkosh in your possession.

This Online-related article is a stub. You can help by expanding it.
Retrieved from "https://en.uesp.net/w/index.php?title=Online:The_Pride_of_Alkosh_(quest)&oldid=2081974"
Categories:
Hidden categories: