The UESPWiki – Your source for The Elder Scrolls since 1995
< Elder Scrolls Online: Quests: Main Quest / Summerset
Jump to: navigation, search

After the cave collapsed, I found myself in a strange ruin. A spectral image appeared before me, a woman named Oriandra. She says she wants to help me get out of this place.

Fight through your memories

You awaken in a strange ruin to the voice of a mysterious woman. She says that she can help you escape, and tells you to move. You aren't frozen, but you think you are. Walk towards her, then pick up and equip the Forgotten Adventurer's Greatsword.

After you pick up the weapon, Oriandra instructs you to head through a door to the west. You need to see what kind of place you're in for yourself before Oriandra can tell you more. When you approach, the ruins behind the door transform into a strange, luminescent landscape. Your vision goes blurry. Find Oriandra, who is just down the path.

Oriandra explains that you've been trapped by a powerful being called K'Tora. During this conversation, K'Tora itself will taunt you before sending lackeys to dispose of you. Here begins your combat tutorial.

Three enemies will approach: generic, withered Warriors. You must light attack the first one. The next will require you to block, then retaliate with a heavy attack. The third one is a magic user. Bash its spell and charge up a heavy attack to kill it. Then follow Oriandra up the path. Oriandra tells you to head to the tower in the middle of the realm. There, you will be able to escape.

As you approach the cliff, a group of crows will fly away. You will need to jump off the cliff to begin your trek towards the tower. At the bottom is a pool of strange goo that cushions your fall. There are many pieces of gear scattered across the mind trap that will help you escape. A shield is on the shore of the goo pool, should you so desire it. 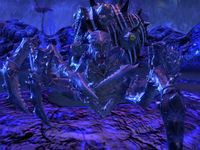 There are many creatures and enemies at the bottom of the cliff. Dessicated warriors and fire mages, frogs, larval yaghra, and nixads are among the denizens of this realm. There are also the skeletal remains of unfortunate souls who didn't make it out alive scattered across the floor. Take their weapons if you wish.

When you reach the tower, you must open the door to get in the gate. There is a strange pearl within the tower. Oriandra proclaims that it's the key to escaping the Mind Trap. Examine it, and K'Tora will send a Yaghra Nightmare to stop you. Kill it and loot the Abyssal Necklace, then destroy the Abyssal Pearl to be transported to Summerset.

You will find yourself in a small ruined nook not too far from Shimmerene. Oriandra is waiting for you there. Speak with her, then crawl through the broken wall to the south to begin your grand adventure.