The UESPWiki – Your source for The Elder Scrolls since 1995
< Online: Quests: Western Skyrim / Side Quests
Jump to: navigation, search

A prideful historian named Narsis Dren found himself trapped in an illusion while researching an ancient mage. Assisting him in his investigation may lead to some exciting discoveries. 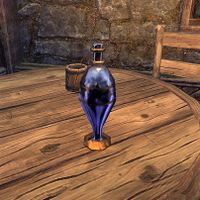 Narsis Dren as the Peculiar Bottle

Inside The Lonely Troll inn in Solitude, in the eastern corner guest room, you'll notice a Peculiar Bottle sitting on one of the tables. Speak to the bottle, and the bottle talks back.

At first the voice takes you for someone else. Inform them of your identity, and the bottle will explain that they are not trapped inside the bottle, but rather suffer from a "very stubborn illusion."

The voice goes on to explain how they managed to trigger the spell, but noted in a journal how to dispel the illusion. Of course you offer to find said journal and assist the unfortunate soul.

It's then that the bottle identifies themselves as none other than "Narsis Dren—famed historian, etcetera." Even if you're very familiar with the Dunmer, he'll still tell you about his incomparable skill as an adventurer.

Narsis will send you to speak to his servant, Borfree Dull-Blade who will give you Narsis' journal. After reading the journal, you'll find the location of the three verses that are needed to dispel the illusion of the bottle scattered around the city of Solitude. One is behind The Lonely Troll. Another on the plaza of the Bards College. The last one is outside the Mages Guild hall. This one will trigger a flash of magicka eliciting a response from the nearby gardener: "Bah! Bloody mages and their bloody tricks."

Return to The Lonely Troll and Borfree will have brought the bottle to his makeshift camp. Read the verses in the correct order and in a flash, the bottle will transform into Narsis Dren himself. Once he determines he's all in one piece he'll inform you that the two of you need the journal of the mage that created the illusion, Maelmoth the Mysterious, in order to find the great master's vault of treasures, Maelmoth's Mysterium.

Unfortunately, Narsis tried to acquire the journal earlier from the Mages Guild, but could not cajole the librarian, Deem-Vilax, to borrow the tome, especially after he tore one of the pages. It now falls to you to convince the Argonian to lend you the precious volume.

Go to the guild hall and you'll find Deem-Vilax making notes among the stacks. You can lie, persuade, or bribe the annoyed tome-keeper to let you have Maelmoth's Final Journal.

Take the book back to Narsis and he'll deduce that the journal contains a clue on how to find Maelmoth's treasure. He claims the clue points to a meditation grotto near Kilkreath Temple. 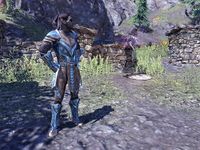 Meet Narsis at the grotto and he'll point out a switch. After activating it, a projection of Maelmoth appears and carries out the sequence needed to solve the puzzle. Narsis' pride gets the better of him and tries to solve the puzzle... and fails. He tries to save face by explaining that he was merely showing how not to do it and that "puzzles can really, really hurt. Yet another lesson, free of charge."

Use the switch to reset the puzzle. Correctly solve the sequence of the tiles and a scroll appears on a nearby pedestal. Discuss the scroll's contents with Narsis and he'll note that: "I don't know about the flowers, but this bit about Lady of the Winter Winds likely points to Kyne." Narsis will tell you of a shrine to the Nords' storm goddess near Chillwind Depths. 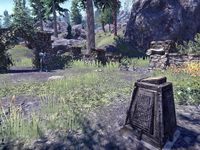 To solve the puzzle, step on the tiles in the following order: 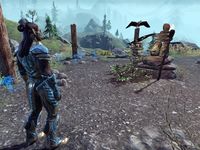 "A path of flower petals? Path to a headache, I'd say. Damn this puzzle!" Narsis will have beat you to the next site and is already exasperated by the time you arrive. Solve the puzzle and … another scroll appears.

To solve the puzzle, light the sconces with the following number of flowers in order: two, four, three and one.

Consult with your partner again and he'll point you this time to :"Sabre Cat's Leap—a rocky precipice southwest of Morthal." 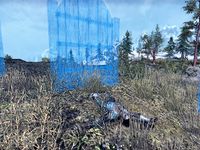 Arrive at the site and there will be four illusory doors. The ever-impulsive Narsis Dren will once again teach you the "consequences of hasty choices" (i.e. gets it wrong again). If you press him for a clue, he'll graciously comply: "A clue? Very well …. Uhm. Read the riddle." He'll be nonplussed if you point out that that was not a clue he'll just use some circular logic and plays the "I did mention that I'm a best-selling writer, didn't I?" card.

Pick the leftmost door and the two of you will be transported to Folgunthur Barrow. 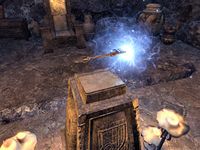 Read the final scroll waiting outside the ruin and discover that by just reading the scroll you have unlocked the barrow. Narsis will be at the end of his patience: "I have never faced a more frustrating foe than this idiot, Maelmoth." Point out to him that the adventure is near its end and he'll rush through the door.

Inside you'll be blocked by a locked door into Maelmoth's Chamber of Treasures, however Narsis will notice a key on a pedestal on the other side of the hall. The key will however be guarded by the spirit of Maelmoth and you'll need to defeat him in order to take the key. Return to the door with the key and you and Narsis can enter.

Inside the vault, Narsis will at first be elated, until he notices that the contents of the room are actually worthless trinkets."Damn that addle-brained wizard! It's just another trick. It has to be!" 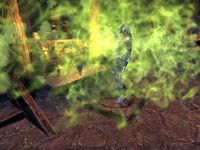 Narsis will notice a book on a table and asks you to investigate. He'll also notice an X on the floor: "A gate of some kind? Hmm."

Read the book and you'll find out that Maelmoth was indeed mad and most of the "treasures" have no real value to anyone other than Maelmoth. However, Maelmoth places great pride on the very complex illusion spell he created; the Bottle illusion. The book explicitly states that the bottle is little more than a trap and will trap whoever touches it inside.

You can warn Narsis that the bottle is a trap, or lie and let him be a victim of his own hubris.

No matter what choice you made, you will need to return that journal to the librarian. Once back at the Mages Guild in Solitude, Deem-Vilax will greet you with her typical disdain. However, if you lied to Narsis and let him touch the bottle, she'll be quite amused at his predicament. She'll gladly take Maelmoth's journal back and even though she says she'll release Narsis from the bottle — eventually, she tells you this is a fine "teachable moment" and sets the bottle on a nearby cupboard. 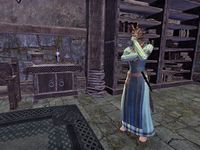 "Perhaps I should find a bundle of flowers. You know … to make Narsis useful, for once."

As you leave the hall, you can hear her say:

Deem-Vilax: "There we are. Oh, Narsis. You really tie the room together. Ha!"

However, if you warned Narsis about the bottle, you will return bottle-less. Deem-Vilax will be relieved that you returned with the journal and without Narsis, and will give you a reward and the quest will complete.

Deem-Vilax: "I simply cannot wait to throw Narsis Dren's next opus in the waste bin. He's a terrible writer. I won't allow his books on my shelves!"

This Online-related article is a stub. You can help by expanding it.
Retrieved from "https://en.uesp.net/w/index.php?title=Online:The_Maelmoth_Mysterium&oldid=2163018"
Categories:
Hidden categories: