The UESPWiki – Your source for The Elder Scrolls since 1995
< Elder Scrolls Online: People / Vendors(Redirected from Online:The Golden)
Jump to: navigation, search 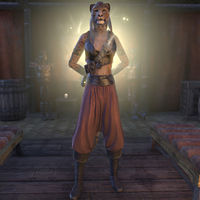 Adhazabi Aba-daro is a special Khajiiti merchant known as "The Golden". She can be found in Cyrodiil at one Border Keep in each Alliance, but only appears at weekends. She arrives at midnight GMT on Friday night/Saturday morning, and is available until 12 noon GMT on Mondays.

She changes her stock each weekend, offering a total of six PvE-only set pieces for large amounts of AP or gold. Two are armor pieces while the other four are jewelry.

The armor comes from Monster Helm Sets. In a given weekend, she sells either two Head pieces or two Shoulder pieces. All three armor weights - Light, Medium, and Heavy - are available for each piece. Armor bought for 200,000 AP comes in the Impenetrable trait, while armor bought for 100,000 gold comes in the Infused trait.

Adhazabi has a vast amount of randomized dialogue. Some of it is tailored to your character, such as referring their race, their wealth and their guild memberships.

If you stand near her, she may occasionally call out to you:

If your nature as a Werewolf or a Vampire is visible, Adhazabi may refer to it:

Depending on how far along the Guild questlines you are, then she will mention your memberships.

Dialogue seems to be based on how much gold your character has on hand.

She will also have additional lines depending on the time of day.