This article is about the enemy. For the item set, see Engine Guardian. 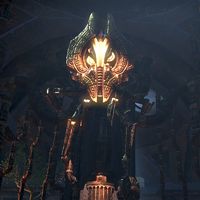 The Engine Guardian is a giant Dwarven Spider that serves as the final boss of Darkshade Caverns II. It is found behind the door to Rkugamz.

It has a chance to drop an Ancient Great Axe and the Antiquity lead for Dwarven Horngrip. In Veteran mode it can drop an Engine Guardian set helmet.

As a boss type creature, the Engine Guardian is immune to all forms of crowd control effects. A tank is not really required for this fight, as the boss does not respond to taunts. Instead, it will move around the central pillar by itself. Every quarter round, the boss will randomly select a new "phase" to enter, and this is indicated by its color. It is possible to get two of the same phase in a row, but never three.

The boss emits a short jet of flame around itself, doing very high flame damage over time to all players hit by it. Players should stay at range to avoid being hit.

The boss does high shock damage to all players within its line of sight. Players can hide behind the central pillar to avoid this.

At the same time, the boss summons three Dwarven Spheres to attack the party. These spheres do moderate damage and should be killed as soon as possible.

The boss does high poison damage over time to all players in the room. Players can stop this by hitting the levers in the middle of the room. Alternatively, if heals are good enough, players can choose to heal through the damage instead. Doing so will net players an achievement.

The Engine Guardian is associated with six achievements: