The UESPWiki – Your source for The Elder Scrolls since 1995
< Elder Scrolls Online: Quests: Prologue Quests / Shadowfen
Jump to: navigation, search

Concordia Mercius of Cyrodilic Collections needs my help to stop Margus Derius and the Blackguards from obtaining the Golden Skull of Beela-Kaar.

Concordia Mercius tells you to talk to Jee-Lar, who sends you off in search of three Argonian experts. Unfortunately, the Blackguards have gotten to them all first, and you may have to fight your way past a couple of Blackguards to talk to them. They are collectively to be found in the wilderness in the center, south and southeast of Shadowfen.

Return to Jee-Lar, who will send you off to search for two pieces of a map. Jee-Lar says that he will find the third piece. The two pieces you end up chasing have both ended up in places where their Blackguard owners have found things too hot to handle. One has been killed by the slavers of the Slaver Camp not far north of Chid-Moska Ruins. This Slaver Camp is technically a group World Event, which is dangerous to handle alone. However you don't have to fight the boss, as the map piece (and the bodies of two Blackguards) are on the edge of the camp, and can be approached fairly easily in stealth. The second piece you have to chase lies within Gandranen Ruins, where the Blackguards have fallen foul of its Fenlord.

After that, you need to return to Stormhold to talk to Concordia Mercius. Fortunately, Jee-Lar has found the third piece of the map and brought it back with him. Now, Concordia has all three pieces of the map. She can't make heads or tails of them, but your own previous research from the captured Argonians works together with the map pieces to point to a Blackguard expedition near Deep Graves, right on the southern edge of Shadowfen. The boat is some way south of Deep Graves, in close proximity to a skyshard and the Atronach Mundus Stone When you get to the boat, you'll find that Jee-Lar got there first. He asks you to convince the pilot to take you there. Fortunately, the poor man doesn't need much convincing, as the Blackguards do not inspire much loyalty in their followers. He takes you to Norg-Tzel without any issue, which is fortunate, as his boat is the only way there and back. 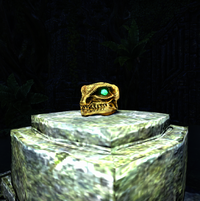 The Golden Skull of Beela-Kaar

The island itself is comparatively small, filled with typical Black Marsh wildlife. There are four Blackguard dig sites which you have the option of investigating. Three of them are guarded by two Blackguards each, with a set of peremptory instructions demanding that they find a "meditation cylinder" - which they've already found. The Blackguards at the fourth dig site are already dead, having been killed by a Bog Blight, although the meditation cylinder they were evidently seeking is also already gone. Near their corpses is a book, The Curse of Beela-Kaar.

A small xanmeer is at the northern end of the island. Fight your way through the tunnels, past Blackguards, Bog Blights, Swarming Zombies, and a monster called Yakh-Xul the Destroyer, until you reach the entrance to the Ritual Chamber. Within this chamber, Margus Derius is killed by his own ritual: after which you will have to disengage the four Ritual Cylinders, which came from the four dig sites you found earlier. Each cylinder will summon an increasing number of Bog Blights and Swarming Zombies in waves before you can disengage it. Disengaging the fourth cylinder releases a powerful but slow creature: the Guardian of the Cursed Skull. You must defeat the Guardian to gain access to the Golden Skull's chamber, although if you're particularly stealthy you can try sneaking past him instead. Grab the skull and head out through the shortcut, then the boat's pilot will return you directly to Stormhold where you can talk to Concordia Mercius for your reward: a large amount of gold, the collectible Murkmire Grave Stake, and the ability to take daily fetch-quests from Jee-Lar, who is conveniently standing near Stormhold's Wayshrine.