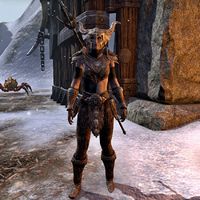 The Beast Master is a huge Nord who has trained beasts from all over Tamriel, and is competing with some of them at the Blessed Crucible: a herd of Incineration Beetles, the Stinger, and the Troll King. She will eventually be crushed by the Troll King once he frees himself from his cage.

The Beast Master acts as an announcer, making comments on the Grand Melee and her pets, as they arrive and are defeated. When the Khajiit gladiators are defeated:

The Beast Master: "No time to lick their wounds. The Khajiit are defeated!"

Upon the Nords defeated:

The Beast Master: "The Nords have been sent packing, to their halls of the Dead!"

When the Altmer gladiators are killed:

The Beast Master: " And there go the Altmer! High Elves, laid low!"

When all of the gladiator groups have been taken out, the Beast Master will come out and unleash her monsters.

"And there we have it! The winners of the Grand Melee!"
<The Beast Master starts walking into the arena.>
"Now for the true test! I've tamed the most exotic and dangerous beasts from the dark corners of Tamriel to test these challengers!"
The first monstrosities—presented for your entertainment—come from the ashlands of Morrowind. These creatures laid waste to an entire village before I captured them!"
"Without further ado, it is my great honor to present...a magically corrupted strain of Shalk. I call them...Incineration Beetles!

Once the beetles are defeated, the Beast Master will move onto the main event:

The Beast Master: "These challengers are surprisingly fierce! But here's the real reason you've come today!"
<Starts walking towards next gate.>
The Beast Master: "Prepare yourself, combatants! Pray to your gods and make your peace. You face the Stinger.

After defeating the Stinger:

The Beast Master: "What? Impossible? How did you win?"

Beast Master will go straight to unleashing the Troll King.

"From the volcanic island of Vvardenfell. A creature of fury that knows no mercy. The vicious...the cruel...the Troll King!"
<The Troll King leaps and jumps on her, crushing and killing her.>