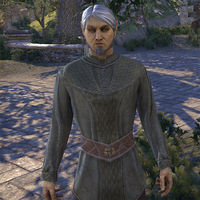 Tarnamir is an Altmer retiree residing in Russafeld who requests that you assist in investigating the recent murders that have occurred.

As former Chief Jurisreeve of the Divine Prosecution's Hindalatus division, he was responsible for training Soravil and Lorne and is aware of the history between the two partners, especially with regards to the original Ghost of the Green case.

After returning from the Red Temple Catacombs, Tarnamir is found dead in his house near the winery by you and Lorne. She casts a spell that shows his final moments, where Tarnamir is approached by Soravil dressed as the Ghost of the Green and expresses nothing but disappointment before Soravil slays him with an arrow.

As you further approach the trio, he says, "I'm sorry, Lorne, but I'm too old, and I know too much. We need an impartial eye." After that, you need to speak to him to accept the quest:

"And just like that, Auri-El provides.
Greetings, ceruval. I am Chief Jurisreeve Tarnamir of the Divine Prosecution... or at least I was, in the long ago. I know this is unorthodox, but perhaps you'd be interested in helping us?"
What's going on?
"As you can see, a murder took place here. My proteges, Lorne and Soravil, came to investigate, but I fear they may lack perspective. The particulars of this murder... Forgive me, I'm getting ahead of myself.
They need fresh eyes. Yours, I believe."
What would I have to do?
"You would take on the duties of the admanen, the listening eye. An auspicious role! The admanen serves as the fulcrum, balancing competing theories. They also collect evidence, interview suspects, and the like.
What do you say?"
All right. I'll help you solve this murder.
"I thank the Divines that you've agreed to help. This murder weighs heavy on all of us.
The victim, Halimorion, was not well-liked. Many locals may lift a glass to his passing. But the assassin, the Ghost of the Green... that's altogether different."

Who is this Ghost of the Green?

"Better to ask Lorne about it. Capturing the Ghost was her obsession for a time. The fact that he's returned does not sit well with her.
I can say no more. I don't want to prejudice your impressions. The admanen should bring a fresh perspective."

What can you tell me about Lorne and Soravil?

"They're the most gifted investigators I've ever trained.
Soravil has keen eyes and solid instincts when it comes to reading people. Good at finding pressure points, you know? As for Lorne? She has a mind like a Dwarven puzzle-box."
A mind like a puzzle box?
"For Lorne, logic is an art. She's clinical in her sensibilities. Precise. Many of us have come to rely on magical inquiry to solve crimes. She relies on her wits and intuition instead.
Of course, this case presents unique challenges..."
What do you mean "unique challenges?"
"Lorne and Soravil drifted apart shortly after they caught the original Ghost of the Green. It's a complicated matter, and not my story to tell.
Suffice it to say, this case cuts deep and Lorne seems distracted. I hope you can help her keep her wits."

Who are you exactly?

"As I said, I am... was the Chief Inquisitor for the Divine Prosecution's Hindalatus wing—the division charged with solving adoctrinal crimes. Forgive me. It's a mouthful for newcomers, I know.
I retired here to Russafeld a few decades ago."
So you're not actually in charge here?
"Well, I own the land, so in some ways I have even greater authority than I did as Chief Inquisitor. I still enjoy a bit of clout too.
Real leadership doesn't rely on titles, cerum. Not a popular opinion here in Summerset, but true nonetheless."
Before you retired, did you make a habit of deputizing total strangers?
"Ha! Fair, I suppose.
I may be retired, but I've spent the better part of three centuries examining crime scenes and interrogating criminals. When it comes to reading people, I am more than proficient."
I'm no saint. (if you've joined the Thieves Guild or Dark Brotherhood)
"Let me guess... Thieves Guild? Or is it Dark Brotherhood? Hmm.
I won't pretend that bringing a criminal into this business sets my heart at ease, but you're no common hood. You're a professional. Who better to investigate a crime than a criminal?"
You really think I'm the right person for the job?
"Well, you're the right person for the job right now. Time and circumstances, my friend. Time and circumstances. I know you won't let us down."

If you talk to him again before speaking to Lorne: "As the Wood Elves say, good hunting! I'm certain the three of you will settle this business quickly. Just keep your head and stay watchful. The Ghost of the Green has a way of sneaking up on people."

After Lorne uses her magic:

This Online-related article is a stub. You can help by expanding it.
Retrieved from "https://en.uesp.net/w/index.php?title=Online:Tarnamir&oldid=2080619"
Categories:
Hidden categories: