The UESPWiki – Your source for The Elder Scrolls since 1995
< Online: Places: Coldharbour / Marketplaces(Redirected from Online:String & Strike)
Jump to: navigation, search 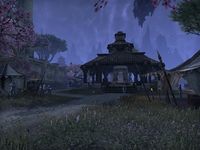 The Hollow City Marketplace is a trading plaza in the central part of the Hollow City. It is situated around the city's smithy, Cold Iron Forge. The marketplace becomes populated with vendors after the successful completion of the Army of Meridia quest.

Several Fighters, Mages and Coldharbour Survivors can be encountered here once the city is restored. There are no safeboxes here.