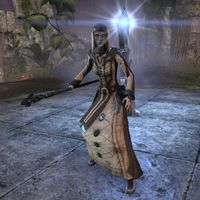 Stormreeve Neidir is a Maormer leader of the Sea Vipers and the third and final boss of Tempest Island. They have a chance to drop the unique item, Neidir's Thundering Staff, and will drop a helmet in the Stormfist set on veteran.

During combat, she uses a variety of shock-based attacks and must be fought close-up, as she will use deadly abilities on group members who fight her from too far away. There will also be various twisters moving throughout the platform during battle.

As a boss type enemy, Stormreeve Neidir is immune to all crowd control effects.

Sparking Strike
A basic ranged attack that deals minor shock damage.
Wind Charge
Neidir charges at a person far away from her and knocks them back, dealing a very high amount of physical damage usually enough to one-shot on vet. This should be blocked or dodged if possible. If all players stay relatively near the boss, this attack will not be used.
Gust of Wind
The boss summons a large blast of wind that deals very high physical damage to all players around her and knocking them back as indicated by a red circle. This attack must be avoided on vet if possible as it is usually a one-shot.
Lightning Strike
The boss shoots a bolt of lightning at a random target dealing high shock damage. This is unavoidable, so be prepared to heal after this is cast.
Electrical Shock
Many Twisters will roam the arena at random. Touching one will stagger and deal moderate shock damage to a player. As time passes, more Twisters will appear. The group should ensure they have enough damage to kill the boss before the damage from the Twisters is overwhelming. Do note that the Twisters can also push players into the boss's AOEs and interrupt rezzes, and may prove very dangerous if group damage is low.

"You Altmer are so predictable. So arrogant."
"A valiant effort, but the invasion will proceed as planned. My storm will behead Malabal Tor, and the Maormer army will feast on its remains."