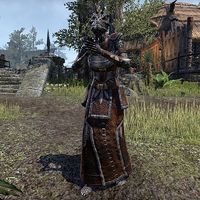 Solni the Entropist is an Argonian of the Black-Tongue tribe and devotee of Sithis, who can be found in Lilmoth, tending to some plants.

When she is spoken to after taking the quests she will say any of the following lines:

"You meet my gaze. Unusual. You either know just enough or nothing at all. What do you want?"
"You've developed a taste for this. But has Sithis developed a taste for you?"
"Don't make a habit of these visits. Routine is a death by many cuts."
"Sithis has not locked its eyes upon you, yet. If you kept your belly to the mud you would remain unnoticed, but you aren't here because you crawl through life like a worm."
"They send you into the great serpent's mouth once more. Do you tempt it to bite, or wish to jump eagerly into its belly, I wonder?"

You can then ask the specific questions (see below sections).

Regardless of the quest, you can always ask the following questions from Solni:

What should I expect to encounter at the Teeth of Sithis?

"The temple has not bared its fangs for centuries, but do not doubt it has them. Mind where you tread if you do not wish to invite the wrath of Sithis."

Any idea why the Blackguards attacked the temple?

"Why do the Blackguards do anything? They are driven by whim and desire. Though the ones who occupy the Teeth seem more like rabid dogs, than raiders. Perhaps the call of Sithis the Destroyer has whipped them into their frenzy."

After you have completed the quest, Solni will say the following lines:

"Sithis cares nothing for your efforts, but they are appreciated by the devoted."
"If you continue to seek its favor, Sithis may numb your agony with its cold gaze before it sinks its fangs into you."
"If this collections you are building instills a rightful dread in the worshipers of the Eight, then you do the work of Sithis."

Varo asked me to retrieve ritual objects from the Teeth of Sithis.
"Tools to slake the thirst of the great serpent. Their heyday has long passed, but some faithful still carry on the tradition of giving offerings with the point of a knife.
Most would disapprove of their use by common thugs and heretics."
How will I know them?
"You'll know by the lives they sent into the great serpent's maw. The lingering remnants of countless souls still clinging desperately to this world. They give a thing weight.
You seek a stone fang, a coiled staff, and a bone chalice."

Varo asked me to recover remains from those who died in the Teeth of Sithis.
"The makings of a grisly display. Do not trouble yourself with concerns of desecration. When we return to the Hist, the flesh remains as a gift to Sithis. Its purpose fulfilled, it returns to the swamp to form something new."
Where can I find them?
"Most remains are long since cast into the muck, but those not yet stripped of their flesh might not have been removed before the elder ways fell. Left to molder where they lay in their preparation chambers, some may remain undisturbed."

Varo asked me to recover some tablets from the Teeth of Sithis.
"The sacred texts. Belief of the elder ways fading further from memory, but they are still precious to those who honor the primal entity. If Cyrodilic Collections can keep them safe, they will be pleased."
You know where I can find them?
"They were on display in the sacrificial chambers, before the temple was overrun by the Blackguards. I cannot say if they were moved by the caretakers, plundered, or shattered to pieces, but I trust you will find them if you are meant to."