The UESPWiki – Your source for The Elder Scrolls since 1995
< Elder Scrolls Online: Quests: Dark Brotherhood(Redirected from Online:Silencer)
Jump to: navigation, search
Speaker Terenus wants to cut off the head of the group that has been moving against the Dark Brotherhood—he wants us to kill Artorius, the Primate of Akatosh. He wants the death to happen quickly, before the Order of the Hour attacks the Sanctuary.

Speak to Grazda or Speaker Terenus to start the quest. The former will say:

"There's something happening at the Sanctuary. That old crow, the Speaker, he asked for you specifically."
Any idea what's going on, Grazda?
"You killed the Black Dragon, right? My guess? It's time to murder the Primate of Akatosh."
What makes you think that?
"Everyone's getting ready for battle. Even Astara has left the Sanctuary. The only one still there is Speaker Terenus, and he asked that I send you to him as soon as I saw you.
Best not to keep the Speaker waiting."
I'll go see what Speaker Terenus wants.

Head to the central chamber of the Dark Brotherhood Sanctuary, and speak to Speaker Terenus to see what he wants:

"The Black Hand has studied the situation and we have devised a strategy for dealing with the Order of the Hour.
We will strike first, attacking from the shadows and winnowing their numbers while you stalk our true enemy—Primate Artorius."
What do you want me to do when I reach Artorius?
"I want you to kill Artorius and fill the Void with his blood. Let the Order see what it means to challenge the Dark Brotherhood. Show them what happens when you hunt the hunters.
But reaching Artorius will require all of your Brothers and Sisters."
All of us? Artorius is just one man.
"One man who hides behind thick walls and a small army.
We sent Tanek to Kvatch to find a way to breach the Cathedral's defenses. Astara and the rest of your brethren will follow after you. Get to Artorius and kill well, Assassin."
Artorius will die.
"Meet Tanek in Kvatch. He should have had plenty of time to find a way past Artorius's defenses so that you can enter the Cathedral.
Other members of your family will join you once the way has been opened."

Head to Kvatch. You'll find Tanek in the graveyard attached to the Cathedral's north wall. Speak to him:

"If I had known I'd have to do manual labor, I never would have joined the Brotherhood! But I found a way into the Cathedral that isn't locked up tight. It just took some digging.
No, really. Some actual digging."
Where is this amazing entrance you've uncovered?
"Inside this mausoleum. When they expanded the catacombs under the Cathedral some years back, the floor of this crypt collapsed. If you're squeamish, don't worry. Somebody was kind enough to relocate the bodies.
I had no trouble expanding the hole."
Sounds like you had to do some heavy lifting.
"Heavy lifting? More like heavy digging. I had to clear some rubble out of the way, but now there's a passage that's big enough to maneuver through."
Then I guess that's our way inside.

Enter the mausoleum through the door, and follow the hallways to the room at the center of the catacombs. Along the way, you'll find several Juvenile Wamasu and the Order Arcanists that have been breeding and raising them; each will act to protect the other. About halfway to your objective, you'll overhear Hildegard and Kor; keep an eye out for a raised walkway and you'll even see Kor dart past you.

[Hildegard, in werewolf form, howls in the distance.]
Kor: "Hilde, wait! Hilde! Hildegard! By all the ice in Eastmarch, she's fast when she's furry."

Run into the next room, and you'll encounter a Wamasu Matriarch — and Kor will enter the room ahead of you at the same time: "Hildegard, which way did you …. Ow! That smarts! I'll deal with the little ones. You take care of their mother!" The matriarch is capable of powerful electrical attacks, which is a problem because most of the floor is a conductive metal grate. Stick to the stone flooring at the edges of the room, and take down the matriarch while Kor fends off juvenile wamasu for you. When the battle is finished, Kor will speak:

Kor: "That was … intense. I'm glad you showed up when you did."
Hildegard: "There you are, Kor! Did you need to stop and rest again?"
Kor: "I never rest when there's trouble around. We dealt with the big monster and now I'm taking a break."

The two will exit through a door that you can't use. Look back at where you first saw the wamasu matriarch; there was a gate behind it, and that gate has now opened. Proceed.

As you round a corner, three Order personnel — one melee fighter, one arcanist, and a healer — will enter the room:

Order Healer: "You said one of the pirates saw a werewolf? What's such a beast doing down here?"

Kill them, and the next bunch of Order soldiers. When they're cleared out, Astara and Elam Drals will drop down from a hole in the ceiling and approach a gate:

On the other side of the locked gate, a sentry will approach.

Astara and Elam will use smoke bombs to quickly sneak out of the area. Look away from the gate; there's another passage, leading downstairs, that you can use.

In the next room, you'll find Grazda under attack by two of the Primate's personnel: "First one of you Order fanatics that moves gets an arrow in the eye!"

Attack the enemy soldiers, and you'll hear Captain Furia say to them, "What are you waiting for? Get in there and kill those murdering deviants!" Additional Order soldiers will begin to pour in from the room's upper floor, dropping down one or two at a time. Once you kill enough of them, the attack will stop for a moment.

Captain Furia: "You have meddled in our affairs for the last time, murderers!"
Grazda: "That one's trouble, Assassin. Prepare yourself for a real fight!"
Captain Furia: "Brotherhood dogs! This ends now!"

At this point, another set of Order soldiers will begin to drop down and attack, while Furia remains out of reach. Once the soldiers are dead, Furia herself will jump down to attack, snapping, "Enough! I'll take care of you myself!" Kill her.

Once Furia's dead, if Grazda remains still and doesn't seem to say anything, then take a very close and careful look at the upper floor. Some of the Order minions tend to glitch out and fail to drop down, and their pathing won't always make them drop down when attacked; you will need a bow, good aim, and good positioning to kill them.

Once Furia and all Order personnel in the room are dead, Grazda will speak:

Grazda: "I could have handled those militant fools … but I appreciate the help."
Elam Drals: "I see I missed all the fun. Grazda, secure this chamber. Assassin, the Cathedral should be just up ahead. When you reach Artorius, I'll be right behind you."

You can speak to Elam and Graza if you wish, then head forward through the tunnels. You'll know you're going the right way when three Order personnel round a corner, with one of them saying, "Assassins in the catacombs? Show me!" Kill your way to the end of the tunnels, and you'll find a wooden door to the Cathedral. Use it.

You'll find Artorius standing at the other end of the Cathedral's main hall. As you approach him, he'll speak, and your fellow assassins will enter the room behind you.

During this battle, Order personnel will continually pour in from doors on either side of Artorius, while he remains perched in place. Artorius is shielded with a magical barrier; to bait him into the fight, you need to kill a few Order soldiers. Once you've killed enough soldiers, Artorius will freeze time, trapping all Order and Brotherhood personnel in place and stunning your character; you'll have to break free and then fight him. Once you've done enough damage, he'll retreat back to his perch, and time will resume. Repeat this pattern — killing Order soldiers and then damaging Artorius — until the Primate is defeated. You'll see a flash of white light as the Primate teleports one last time.

As you approach the wounded, stunned Primate, he'll utter his last words:

Primate Artorius: "I will not beg for mercy from the likes of you."

You'll receive a button prompt to "Use Execution." Follow the prompt, and you'll impale Artorius on his own staff.

Astara Caerellius: "To the Void with you, Artorius. May the Dread Father grant you the welcome you so richly deserve. Stand tall, Brothers and Sisters. We are the Dark Brotherhood. Now, back to the Sanctuary, my assassins. We have friends to remember and a victory to celebrate."

The Cathedral doors are no longer locked. You can simply walk out of them, fast-travel to the Gold Coast Wayshrine, and head north to the Sanctuary. Inside, speak to Speaker Terenus to complete the quest:

"Welcome home, Assassin. I know what occurred but I want to hear it from your lips. Say the words and say them loud."
Primate Artorius is dead.
"Then the head of the beast has been cut off. Well done, Assassin!
We will reach out to Count Carolus and the Order of the Hour to make sure this ill-conceived war ends here."
Is there anything else we need to do, Speaker?
"Regarding Artorius and the Black Dragon? No. That threat has passed.
But there is one more thing. Step back, Assassin, and prepare yourself." 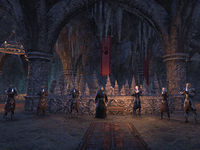 After you complete the quest, the surviving members of the Brotherhood — Astara, Elam, Grazda, Hildegard, Kor, and Tanek — will approach, their heads bowed, each holding a lit candle. The group will speak, referring to your character:

Terenus: "Sweet Mother, sweet Mother, look upon your child and smile. For the unworthy have been cleansed in blood and in fear. Her/His heart shines with the color of night. Her/His song sings with the music of life. Her/His gaze inspires fear and her/his hands grant the gift of death. The Dread Father acts through her/him. And her/his work has just begun."
Astara: "Step forward, loyal Sister/Brother."
Terenus: "Step forward, my Silencer!"
All: "Hail Sithis."

The group will disperse. Speak with Terenus one final time, and he will explain: "You are a Silencer now, an honored member of our family. I expect you to fill the Dread Father's Void with many, many souls. Go forth, Silencer, and may your blade never lose its edge."

The Dark Brotherhood storyline is over, but there are still contracts to complete, Sacraments to fulfil, and the Litany of Blood to decipher.