After you've joined the Dark Brotherhood, Speaker Terenus will assign you a task in order to fully prove yourself.

"Are you ready to accept the task that awaits you? To prove your worth to the Dark Brotherhood and take your first steps into the Night Mother's cold embrace?"
Tell me about this task you want me to accomplish.
"The Imperial noble, Lord Quintus Jarol, has been marked for death by the Black Sacrament.
Your task is simple. Find Jarol and kill him."
Why has he been marked for death?
"That isn't a question we ask. Suffice it to say, he offended someone enough to get them to perform the Black Sacrament. The Night Mother heard the prayer and now Jarol must die.
This is the task I have set before you."
I'll kill Lord Quintus Jarol.
"Excellent. The noble's estate can be found northwest of Anvil, along the Gold Road.
How you perform the execution is up to you. Just make sure Lord Quintus Jarol dies by your hand. Then your initiation into the Dark Brotherhood will be complete."

You may speak to him again for some advice. If you do, he will tell you about a secret tunnel between the Withered Rose inn and the Jarol Estate. Attempting to infiltrate the estate unseen from the outside can be quite difficult otherwise.

Travel to the Withered Rose, which is located northwest of Anvil. Neither the proprietor Ladia Rose or her daughter Lucinia have anything useful to say, so look for the locked cellar trapdoor under the stairway inside the inn. The only item of interest in the cellar is a note from Quintus Jarol which reveals he is paying Ladia for the use of the tunnels. Four civilians are working in the tunnels and two soldiers are patrolling. This a good opportunity to practice with the Blade of Woe, as all of them will at some point turn their back on you. It is also possible to sneak unseen past all but one of the soldiers/civilians if you prefer to keep casualties to a minimum. Outside the tunnel, it is a fairly simple matter to make your way west to the main building, which is also locked. Avoid or eliminate the single guard in the cellar and proceed into the tunnels.

Inside avoid the two siderooms and make your way upstairs. Watch out for a tripwire at the top of the stairs too. Look for the letter from the governor on the table, which talks of a secret chamber underneath the estate, and gives clues to its entrance. When you came upstairs two soldiers entered the building, and they now patrol downstairs. Watch their patrol pattern and make your way to the wine cellar entrance. In the cellar pick up the contractor's note which reveals exactly how to unlock the entrance and where it is. 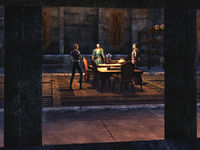 Eavesdrop on the secret meeting

There is a tripwire at the top of the second flight of stairs. Watch for a guard patrolling this long stretch of tunnel. At the other end you will be able to overhear a secret meeting between Quintus, Governor Fortunata ap Dugal of Anvil, and Count Carolus Aquilarios of Kvatch. Listen to it then deal with or sneak past the guard who is also listening in. Head to the northern tunnel, but watch for a guard who patrols right to the entrance and a tripwire. Follow the path up to another locked gate. There is another guard patrolling this room, then head south to eavesdrop on more of the meeting. At this point a guard will interrupt the meeting and announce that some guards have been found dead and they suspect the Brotherhood has arrived.

Head east into another tunnel. Watch for the tripwire and sneak behind the planks leaning against the southern wall to stay out of sight of the next guard. Alternatively, there is a hiding spot in the room to the north. The next section from here is heavily populated with guards, so it is best to eliminate them to give time to assess your approach to the next guard. Turning south, pass by the room to the east, and watch for a guard walking the east-west tunnel. The eastern room has two guards and you will get a bounty if you take them on. Another guard patrols the north-south tunnel, and there is another eastern room, this time with three guards. Avoid it if you don't want a bounty and make your way around to the main room.

Commander Pelletus patrols this room, and conveniently also the part of the tunnel past the hiding spot. Though you can line him up to kill him with the Blade of Woe, you won't receive a bounty if he or any of the guards in the next section see you. Go through the meeting room and into the western tunnels. Watch out for a large wire trap at the corner with a mage nearby. At the bottom of the tunnel are two guards. Wait for them to split up and then deal with them. There is a hiding spot in the next room and another guard. The hiding spot marks the end of the bounty-free guards. Directly north of the hiding spot is a secret tunnel which avoids the long path containing multiple guards, wardens, and traps.

If you choose to go the long way around it is quite awkward to avoid the wardens detection radius, but not impossible. Let the warden climb the boardwalk to the left and then stay to the right, but not for too long as the boardwalk to the right has three guards, one of whom will walk down and into the tunnel you aim to traverse. There is a hiding spot on that boardwalk but it is too close to the guards to be useful. Instead, go to the shadows to the left and wait for the guard to return back from the tunnel, then press ahead. There is a guard around the next corner and another two in the alcove to the north. Deal with the patrolling guard quickly before one from the opposite side of the tunnel gets within range, then dive into the hiding spot to the north, behind the pillar. Continue on and where the path turns north is where the secret tunnel cuts to. 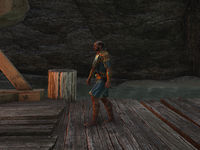 Locate and kill your quarry

Around the final corner is a subterranean dock. Two wardens patrol the docks along with Quintus, who is expecting you. He taunts you to attack him directly rather than from the shadows, but doing so will make you lose your bonus. Both wardens will wander over to the near side, so take your time and eliminate them first. Then make your way along the north of the dock behind the low fence which hides your approach. Wait for Quintus to walk past your position then strike.

Leave the estate through the dock exit and return to Speaker Terenus.

"We know that Quintus Jarol is dead. The Brotherhood has eyes everywhere. You have done well. The covenant is sealed, signed in blood. Welcome to the family, Sister/Brother."
That's all I had to do to prove myself?
"We have been watching you for a long time. Killing the noble simply sealed our covenant. Now you need to meet your Brothers and Sisters.
I will send you to a Sanctuary. A safehouse of sorts. A home, as well as a source of additional contracts."
Where is this Sanctuary?
"Not far. It's the reason I summoned you to the Gold Coast. There is much work to accomplish here, and you will be a part of that.
Your new home lies to the north, hidden beneath Varen's Wall. Go there and attempt to open the Black Door."
The Black Door?
"The Black Door will pose a question: "What is the flavor of fear?" Reply, "Sublime, my Brother," and the Sanctuary shall be opened to you.
Once inside, seek out Astara Caerellius. She has additional instructions for you."

He will give you the password to the Black Door and tell you to go to the Dark Brotherhood Sanctuary. Answer The Black Door's question, and report to Matron Astara, who is located in the central chamber.

"You must be the new Initiate. The Speaker sent word that you were on your way. I'm the Matron of this Sanctuary. Obey me without question and I'm certain we'll get along just fine."
Of course, Matron.
"And this is for you—shrouded armor, the uniform of the Dark Brotherhood. You're one of the family now. You might as well look the part.

If you killed the target with Blade of Woe, she says: "And since you showed such expertise with the Blade of Woe, take this as well.
I expect great things, Initiate."

Otherwise, she says: "Perform well and you'll rise in the ranks of the Brotherhood. I'm sure you'll make us all proud."

You will then be given Shrouded Armor, an Unidentified Sithis' Touch Weapon (the quality depending on the above), and some gold.

Notes
* Any text displayed in angle brackets (e.g., <Alias=LocationHold>) is dynamically set by the game and will be filled in with the appropriate word(s) when seen in game.
Retrieved from "https://en.uesp.net/w/index.php?title=Online:Signed_in_Blood&oldid=2649559"
Categories:
Hidden categories: