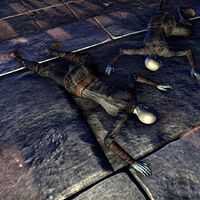 Shriven Nobles are feral soul shriven brought in by The Adjudicator, usually alongside Shriven Aristocrats. When these Nobles and Aristocrats are killed, their souls are stored in the pillars on both sides of the room. These towers will occasionally shoot a bolt at all members of the party, doing moderate magical damage. This damage increases as the fight progresses and as more Nobles or Aristocrats die, thus the party has to defeat the boss before the damage becomes too great.