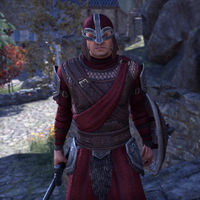 Shield-Corporal Thjol is a Nord guard who can be encountered outside the gates of Solitude or at the Western Skyrim Docks. He is suspicious of newcomers and outsiders.

After the heavily injured Brondold manages to give you some papers and a warning not to trust anyone, he will expire. Shield-Corporal Thjol will then arrive on the scene demanding to know what happened.

Shield-Corporal Thjol: "You, there! What did that fugitive tell you?"

When you talk to him, he will be very suspicious of you.

"Who are you? Another spy? What did this lying easterner say to you?"
I was just going about my business when I saw that he was injured.
"Assisting a fugitive is a crime in Haafingar Hold. Unless you want to find out how we deal with traitors and spies, tell me what he said to you."
He said something about the Icereach Coven at work in the west. Do you know what that means?

"Icereach Coven? Ridiculous! The only threat to the west are those damn spies from Eastern Skyrim, conspiring against our king. Forget whatever nonsense this skeever told you and be on your way.
You hear more talk like his, report it to the guard."

[Lie] He died before he could say anything.

"Lucky for you. If he had told you any seditious lies and you decided to keep them from us, you'd have been in real trouble."

Both options lead to his final warning before he dismisses you.

I hear you.
"Don't stick your nose where it doesn't belong. Solitude doesn't take kindly to instigators or strangers, and mark my words, you'd rather not get on the wrong side of the high king's guard."

After speaking with Shield-Corporal Thjol, he will head back to the city.

Shield-Corporal Thjol: "Go on. Just remember, I'll be keeping an eye on you."

When he is gone you can check the blood soaked papers Brondold gave you to continue your investigation. 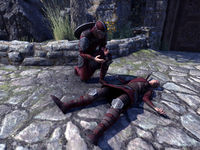 While finding witnesses to the assassin which escaped the Blue Palace, Shield-Corporal Thjol can be met once more at the main gates. He will be kneeling over the body of a fellow guard.

"You again? Didn't I warn you about putting your nose where it doesn't belong?"
A priest said a vampire came this way. Is that what happened here?
"A vampire? I don't know what you're talking about, but whoever it was tore out Sonolia's throat and fled through the gate before I could stop him.
What do you know about all this and why is it any of your business?"
The vampire assassinated Queen Gerhyld. Princess Svana asked me to track him down.
"The queen's … dead? What about the high king? He'll have my head for letting the assassin slip away."
Your head is probably the least of your worries once the high king hears about this.

"You—you think … would the high king really … but I'm a loyal subject ….
No more talk. I need to get Sonolia off the street."

No one was able to stop the assassin. You did what you could.

"Yeah … yeah. It's not like I opened the gate and let him slink off. The real problem's at the palace.
No more questions. I've got to secure the gate and take care of poor Sonolia."

Speaking to him after Lyris arrives, he will have a request.

"No need to mention me to Princess Svana or the high king, right?"

When you arrive in Solitude looking Lyris after helping Svana in Karthald, you will find Thjol and his fellow guards herding docile Harrowed to the Temple of the Divines in Castle Dour.

Shield-Sentry Brunn: "Come on, you brainless cur! This way!"
Shield-Corporal Thjol: "They're worse than drunkards after the mead hall closes!"
Shield-Sentry Jurt: "Shh! Don't mock the cursed! You'll call a hex down upon us!"

Thjol is now even more suspicious of you since it seems like everything started happening once you arrived in his city. Talk with him to ask what they are doing.

"You again. Always where you don't belong. All this foulness began when you showed up. Should have known you were bad news when I found you with that spy.
You might have the princess duped, but I've got my eye on you."
What are you doing with the harrowed?
"Harrowed? Is that what we're calling them?
Well, not that it's your concern, but High King Svargrim ordered us to herd these poor sods into the Temple of the Divines so the priests can care for them. If you ask me, they're a lost cause."
So High King Svargrim has finally decided to take action?
"Careful, outsider. We don't take kindly to that kind of attitude when it's directed at our high king. If you want to know so badly, go ask your precious princess.
Now leave us to our work before I decide to herd you right to the dungeons."