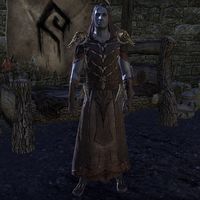 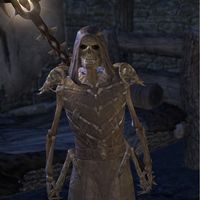 Chirah in his undead skeletal form

Shaman Chirah is a Kothringi mage in Stillrise Village. He and his supporters are rueful of his people's undeath, and are at odds with War Chief Helushk.

"Greetings, stranger. Visitors to Stillrise Village are rare. Have you spoken to our chief? Her dwelling is at the center of town."

After Suhlak reveals the undead curse:

"Take this totem. War Chief Helushk can let you inside the Daedric Prince's temple. Once inside, place the totem upon the blood fountain as an offering to Clavicus Vile."
I'll speak with War Chief Helushk.

"I fear there's little time before the Worm Cult discovers the secrets of the soul gem array. Be quick, before they add us to their ranks.
Yet another benefit of this damnable curse."

How did the Worm Cult steal the soul gem array without dying themselves?

"The cultists forced their undead thralls to carry it away. Such will be the future of Stillrise Village if you don't recover the soul gem array."

You can then ask about the curse:

Tell me about the curse.

"Decades ago, the Knahaten flu swept through the land. The children were first. By Z'en, I can still see the bodies...
But Z'en couldn't save us. So at Chieftain Suhlak's behest, I prayed to Clavicus Vile. He bestowed this mockery of salvation upon us."

Without the curse, would your village have survived?

"You call this survival? To never again taste guar-flesh, nor feel a lover's touch? We are but shadows in the water.
Some feel the curse is a Daedra's cruel jest, yet I thank Clavicus Vile for a vital lesson. Immortality is the true curse, you see?"

"I fear there's little time before the Worm Cult discovers the secrets of the soul gem array. Be quick, before they add us to their ranks.
Yet another benefit of this damnable curse."

If you speak to him after receiving the Curse of Stillrise, he'll say:

"Have no fear. The offering was intended to pique the Daedric Prince's interest. It worked, perhaps better than expected."

If you speak to him after recovering the soul gem array, he'll say:

"You recovered the soul gem array, yes? Then inform Chieftain Suhlak, so Stillrise Village can finally achieve its salvation."

Before speaking to War Chief Helushk, he'll have this to say:

"The Worm Cult nearly unlocked the secrets of the soul gem array. If they could get their hands on it, so could anyone else.
This torment will never end, unless you're the one to end it."
What do you think I should do with the soul gem array?
"Destroy it, so Clavicus Vile's grip upon us ends. Our bones may collapse, but our spirits will finally be free."
How would I destroy the soul gem array?
"Clavicus Vile provided the means on the day he cursed us. Deep in the Daedric ruins burn two braziers: one of ice, the other of fire.
Placing the soul gem array into the Fires of Destruction will destroy it."

You can either agree with Chirah or tell him you consider Helushk's proposal:

I'll destroy it and free Stillrise Village from the curse.

I need to speak with War Chief Helushk before I decide.

If you tell him that you will destroy the soul gem array:

"If we are to have any peace, we must destroy the soul gem array."

If you tell War Chief Helushk that you will preserve the soul gem array, Chirah will yell and run out the hut:

During the battle inside the Odious Chapel, he'll say:

After preserving the array and returning to the village, he'll have risen and found in his hut:

"You trapped us like this forever. Keep away from me."

If the soul gem array is destroyed, he'll be in the center of the village with Chieftain Suhlak, where he'll say:

Upon completion of the quest: 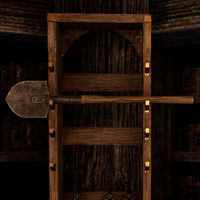