The UESPWiki – Your source for The Elder Scrolls since 1995
< Online: Places: Summerset / Gates / Quest Hubs
Jump to: navigation, search

"That big coastal fort southeast of town? In my grandmother's day they named it Aldveyond Beldaburk, but nowadays we just call it Sea Keep. Easier, I suppose, but I prefer the grand old moniker." ―Tenigwe, at the Shrewd Brew 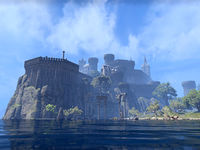 Sea Keep is a fortress in northwest Summerset. It is situated east of Lillandril, along the southern coast of the northern peninsula. It has been infiltrated by the Storm Sharks, who slaughtered those within the garrison and conjured a storm around it. The Aldmeri Dominion is camped out down the hill east of the keep. A cooking fire can be found at this camp.

After the quest, you'll end up at a camp to the northeast. A heavy sack can be found in the northern tent. There is a chest atop a rocky ledge north of Sea Keep.

You must enter this tower to open the gate.

There is a cooking fire in the coral caves. Castire is locked in a cell in the dungeon ahead.

There is a cooking fire in the barracks. A nearby table contains a copy of The False Revanchism of the Maormer.