The UESPWiki – Your source for The Elder Scrolls since 1995
< Elder Scrolls Online: Places: Cyrodiil / Scroll Temples
Jump to: navigation, search 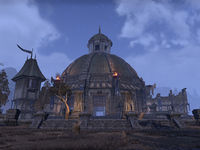 The Scroll Temple is located in on a plateau in the highlands, guarded by a range of hills and a high wall to the east. The temple grounds include a number of ruined Imperial buildings and fortifications, and a skyshard can be found within one of these just to the west of the temple. A ruined tower stands above a lake in the northern section of the grounds, and a small lumbermill can be found on the main road between the temple and the Southern High Rock Gate. Southwest of the lake lie the Covenant Siege Training Grounds, where new recruits learn to use the various different types of Siege Weapons.

Protected Area: The temple grounds are usually a Covenant safe zone, but when the Artifact Gate is open, enemy troops may be found in the area.