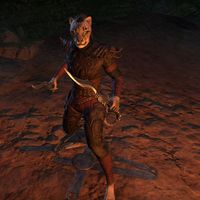 A member of the Ruddy Fangs

The Ruddy Fangs are a Khajiit bandit pride operating in Northern Elsweyr, led by Zayreba Sharpclaw. They have the biggest presence near the Scar, but are a scourge upon all of Elsweyr. Their main source of income is smuggling things to and from Elsweyr, and one of their biggest products is Skooma. Those within the ranks of the Ruddy Fangs are required to throw out any morals, and the only way to get out of the business is death.

Recently the Ruddy Fangs began preying on refugees fleeing the rage of Dragons unleashed from the Halls of Colossus, and have a smuggling operation in Riverhold. For more information, see the lore article.