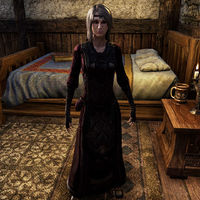 Rhea Opacarius is an Imperial oracle of Azura who can be found at the Cloudy Dregs Inn in Wayrest. She needs your help locating the other Oracles, who have gone missing.

Rhea will be waiting for you in the Guest Room on the second floor of the Cloudy Dregs Inn:

"Ah, right on time.
I'm joking, of course. Honestly, I feared you wouldn't come. Divination and prophecy yield few certainties. Still, this vision was clearer than most. You and I. This room. The scent of ale and woodsmoke. Yes, this was meant to be."
You can see the future?
"I'm afraid it's not as easy as that. I see a tangle of futures—a swirling mass of action and consequence. Every now and again, though, a specific moment strikes like a thunderbolt. Moments like this.
Some dark entity stalks the oracles of Azura."
Oracles of Azura?
"Yes. Servants of the Twilight Queen. My friends and I decipher visions of the future for other votaries of Azura. Unfortunately, something is abducting us one by one.
Bring this crystal to Pariah Abbey. Our Rose Mother will tell you the rest."
Very well. I'll seek out Azura.
"I do hope you'll hurry to Pariah Abbey. I see the other oracles, my friends, languishing in chains. A prison that hurtles through space and time—filled with Daedra and choking steam.
Ugh. Gives me vertigo just thinking about it."
How often do you see this tangle of futures?

"All the time.
Makes dinner dates interesting, I can tell you. One moment we're speaking about the consistency of the soup, the next I'm fumbling with my spoon, rambling about talking candlesticks and trees made of blood."
How's that go over with your dinner companions?
"Ha! Haven't you a cheek.
If you must know, it goes poorly. As I'm sure you can guess, the gentlemen rarely call on me a second time."
"How did you gain this power? Did Azura give it to you?"
"I'm not sure. My parents thought me mad. Abandoned me on the streets of Wayrest at the tender age of eight.
Mercifully, the abbot of Pariah Abbey discovered my gifts and introduced me to the Twilight Queen. I achieved clarity. I have Azura to thank."

You said other oracles were abducted?

"Two. Kanzin and Muz-Shah. Both powerful soothsayers in their own right.
Kanzin vanished a week ago, pruning his sugar canes. His fellow votaries told me that he showed no signs of distress. He simply walked out into the field and never came back."
And Muz-Shah?
"Muz-Shah, an Argonian, disappeared just two days ago. He tends Azura's shrine in Black Marsh. It's a quiet affair with a simple shrine and very few acolytes.
He went out to light votary candles near the shrine and never returned."
And you're certain they were abducted?
"Beyond certain. I heard their cries—still hear them, in fact.
These abductions stink of Daedric plotting. Rival Princes conspire against my lady constantly. One of them seeks to blind her by snatching up her oracles. Perhaps more than one."

How do you know Azura will speak to me?

"Because you're anointed by fate. Or something close to fate. I stopped arguing the specifics years ago.
The Queen of Dawn and Dusk needs your help. Trust me, Azura's desires are hard to miss. She is … insistent. She'll speak to you, believe me."

Return to Pariah Abbey after going on some errands for Azura and Rhea will be waiting for you in the courtyard:

"Azura's champion returns!
I saw you in my visions. You stood atop a mound of corpses, destroying Daedra by the hundreds. It was … cathartic. That sounds horrible. Let's just say it was a welcome distraction from what else I've seen."
Did you find the missing oracles?
"At long last, yes.
I gazed through an ocean of screams and … well, I won't frighten you with the particulars. Suffice it to say that I saw many terrible things, but I think I've located the other oracles."
Where should I start looking?
"My first visions were of … wait. What's that?"
Rhea?
Rhea will be swept up into the sky, leaving behind a letter for you.

Rescue Rhea from her prison in Mephala's Nest and she'll thank you:

Rhea Opacarius : "You found my note! Thank the Rose …. And you, of course."
Rhea Opacarius : "I caught a glimpse of our enemies while I hurtled through Oblivion. They lurk in a ruin, deep within a swamp. The face of a lizard looms above them. More questions …."
Rhea Opacarius : "When the others are safe, we should seek my Lady's counsel. Hurry back to Pariah Abbey!"

Back at Pariah Abbey, she'll say:

"I'm in no great hurry to return to Oblivion, I can tell you that. One day, I hope to see the Twilight Lady in all her radiance, reclining upon the throne of roses. But where they took me? Far from rosy.
We must find Azura's enemies quickly."

After getting information about Shadowfen from Azura, she'll add:

"So, the Twilight Queen's enemies lurk in Shadowfen.
My fellow oracles and I will prepare to travel at once. Between your strength and our sight, these monsters don't stand a chance. See you there."

At Cold-Blood Cavern, find Tommy Bones's Journal and she'll come up behind you:

"Seems this 'Tommy Bones' fellow was duped by a Daedra named Dyzera. I've seen her before. Lurking in the shadows of my visions, just out of focus.
She must have put a hex on these "gifts." Cursed treasures … the bane of all thieves."
So what now?
"Dyzera must lead this wretched band of conspirators. The abductions, the Void Keys, the dead bandits—all her design. We know who she is, now it's just a matter of finding her.
Perhaps we can bait her. Reacquiring these "gifts" might do the trick."
How would that work?
"Tamriel doesn't suffer curses like this for long. Daedric hexes are too unstable. Nirn rejects them.
Putting all three items in one place will shake the veil like moths in a spider-web. With any luck, Dyzera will come to investigate."
All right, I'll gather these cursed items. What will you do in the meantime?
"Kanzin, Muz-Shah, and I will gather here to prepare a gazing rite—a collaborative vision. If you manage to lure Dyzera out, we might catch of glimpse of what, or who, is driving her."
"Just be careful, all right? This place seethes with Daedric energy. I see … golden horns, suspended from gossamer strands. All covered in blood.
I fear I'll see much worse before this adventure ends."

Defeat Dyzera and return to the den. You'll find Rhea, Kanzin, and Muz-Shah in the middle of a ritual:

Rhea Opacarius : "Part the gloaming fog. Gaze deep beyond the twilight and perceive …."
Kanzin : "I see … an island. A mountain of rage and ashes."
Muz-Shah : "A great heart, pushing fire as blood …. A source of power, cloaked in secrets."
Rhea Opacarius : "A city of oil and bronze. A shrine to vanity, driven by clockworks and steam …."
Rhea Opacarius : "There's more …. A gathering of Princes … three faces, shrouded. All of Nirn, drowned in blood! Enough!"

Rhea will fall to the ground and rise up holding the moon and star. She will be possessed by Azura who has a message for you:

"Rejoice, champion. You speak now to Azura, Queen of Dusk and Dawn."
What have you done to Rhea?
"I glorify her body and make a vessel of her mind. Do not trouble yourself. She will return, in time.
Your true concern is these visions. My oracles perceive a holocaust, child. A Daedric storm the likes of which your mortal world has never seen."
What should we do?
"We wait … and listen.
Patience. A difficult concept for mortals, I know. Such short, beautiful, brutish lives you lead. For now, Dyzera lays dead and my oracles breathe free air. That should be enough for you."
So you can't tell me any more about Rhea's vision or this Daedric storm?
"Rhea sees but a sliver of what's to come. Even now, Princes unbound by Sotha Sil's compact move against Nirn. I retire to Moonshadow to prepare.
We'll meet again soon, in a distant land. Perhaps sooner than you'd like. Until then, walk in twilight."

If you have completed the Morrowind storyline:

"Rhea sees but a sliver of what's to come. Even now, Princes unbound by Sotha Sil's compact move against Nirn. I retire to Moonshadow to prepare.
Vile's work in Vvardenfell was the first taste of something far worse. Ready yourself, child. Night draws near."'

Rhea Opacarius (as herself): "What … was that?"

After this you will receive the Twilight Shard and Azura will leave Rhea. Rhea will be dazed after her experience but is willing to answer some questions:

"Oh my. Was that—? Did The Twilight Lady claim my mind?
What an honor. What a … profoundly disorienting honor."

Azura mentioned the compact of Sotha Sil again. What do you know about it?

"Very little. The Queen of Dawn and Dusk rarely talks about it.
I know that the Dark Elf Tribune, Sotha Sil, summoned eight Daedric Princes to a summit in Coldharbour. They argued for months, but eventually gave in to Sotha Sil's demands."
And what were his demands?
"The Princes agreed to stop meddling in mortal affairs—directly, I mean.
Princes bound by the compact can't manifest in physical form here on Nirn. They can still push pieces around the board through intermediaries, though. Agents, like you and me."
So, I'm a Daedric agent?
"You are now.
Just be careful. The Twilight Lady has a deep well of love in her heart, but it's a dark, tempestuous love. Love like hers has to be respected. Never, ever forget that. Your life depends on it."

Who do you think was really behind all this?

"It wasn't Dyzera, I can tell you that. She was a formidable adversary, no question. But a plot of this scope? Mounting an attack on a Daedric Prince directly? No lesser Daedra would do that alone."
Azura seems confident that another Daedric Prince is to blame.
"If Azura thinks it's so, it is so. Truthfully, I think it might be more than one.
Only a Prince would strike another Prince. If this plot does go that high, we could be looking at another Planemeld … or something even worse. Rose help us."

What will you do now?

"The last part of our vision—the gathering of Princes. Something deep and terrible lurks in that imagery. Time for a trip to the library. Or several libraries.
I'm sure you'll have your hands full in the meantime."
What makes you say that?
"Your spirit appertains to our vision, somehow. The island, the fire and ash, the clockworks and steam—you're planted like a tree, right in the middle of it. All of it."
Will I see you there? Wherever "there" is?
"Hard to tell. The future grows murkier by the minute. Perhaps that's a good thing. Or perhaps it's a very, very bad thing. Only time will tell, I guess.
I know one thing for certain though—your fate intertwines with that of Azura."
So I'll see her again?
"Undoubtedly. And sooner than you think.
Just remember, love and envy are two sides of the same coin. Like dawn and dusk—only a subtle difference keeps them apart."

This Elder Scrolls Online-related article is a stub. You can help by expanding it.
Retrieved from "https://en.uesp.net/w/index.php?title=Online:Rhea_Opacarius&oldid=2617626"
Categories:
Hidden categories: