The Wood Elf brewing town of Willowgrove is trying to expand their beehives. They've hired help to clear the forest. This help appears to have suffered some difficulties.

South and west of the Willowgrove wayshrine, close to the Moonmont wayshrine, is a Bosmer named Ragalvir. He welcomes you to Willowgrove, home of the "finest golden honey-mead." However, when they hired a mage to clear out some of the forest to make way for more beehives, they ran into a problem. If you want to help, you should speak to Treethane Ranneth.

The treethane is in the biggest house in the city. She has a guest, but she explains that the Altmer mage has been taking a long time to clear the woods. If he doesn't complete the contract, he will have to eat his wife, Alanya. Alanya volunteered to be the "pact-hostage" since the people of Willowgrove know little about magic and are suspicious of Pircalmo. The treethane wants to give him more time, and you may be able to help. She suggests you ask Alanya what you could look for in the mage's tent to explain the delay.

Alanya is across from the treethane. She seems excited to be a pact-hostage and compliments the town's mead. You can ask her about her husband and if she's frightened. She thinks her husband may have just forgotten something, since he's even forgotten to perform a ritual in the past. She's not worried because her husband told her the pact was "just a formality."

Pircalmo's tent is southwest of Alanya. There are four papers to look at on the table. On Pircalmo's Emergency Reversal, second from left, is the one you want to read. The others include Tamrielic Calligraphy, Chapter VII, Unfinished Letter to Summerset and Pircalmo's Shopping List.

Once you read the Emergency Reversal letter, turn around and talk to a confused Pircalmo. He says something's gone wrong, and you suggest he try Telenger's emergency reversal ritual. He claims he has to tend to "things on the hill," so you will have to gather the ingredients. You need to gather the chitin of a hoarvor, five torch bug thoraxes, and a heartwood fragment. He thinks Treethane Ranneth will know where to find them, thanks you profusely and runs off after you promise to meet him on the hill.

Although you can talk to Ranneth, you can also start collecting ingredients right away. There are lots of torchbugs in the area. The heartwood fragment is in Tholerthorn's House. In order to get the chitin, you must talk to Ranneth. She thinks Sarolion-Sells-All should have some since he is a traveling merchant. Head west to the merchant stand, and talk to Sarolion. You can intimidate him into giving you the chitin for free (if you have the perk), pay him 60 Gold for it, or do a favor for him.

Once you have the chitin, go south up the steps or climb the side of the hill. You notice various atronachs, and talk to Pircalmo, who is inside a magical bubble. He wanted to summon a magic force to clear the trees and says that Altmer don't make Daedric pacts. He begins the ritual.

"Okay, okay. I can do this. Just like forgetting my notes. Here we go. Wow. Master Telenger's spell is easier than I thought. I think I…something's wrong. What's going wrong? I did it right! It's…I need help!"

Talk to Pircalmo again. He's having trouble sending back the atronachs, since he didn't intend to bring them here in the first place. He needs you to gather a core from each kind of atroanch, so he can link them to the spell.

You need to defeat a flame, frost, and storm atronach and take their cores. Not all atronachs will drop cores, so you may have to fight a couple.

Bring the Unmarred Flame, Frost, and Storm Atronach Cores to Pircalmo. However, you see the treethane confront him first.

"What's going on here? Did you summon Daedra into our forest?"
"Working on it…Please I'm trying to…"
"You're a monster. Our contract is broken. The Green has spoken."
"No! Wait!"

He's worried Ranneth will cook his wife and realizes that something must be corrupting his ritual. He usually fails, and this spell worked too well. He gives you a wand he "borrowed" from Telenger and asks you to find the source of corruption while he saves his wife.

The Source of the Corruption[edit]

Use Pircalmo's Wand of Finding, and although it only appears in short bursts, the blue orb leads you to Willowgrove Cavern. 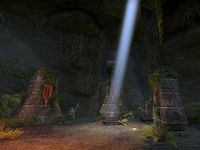 The source of corruption

Follow the path inside the cave until you see a strange statue of a man holding a horned helmet and a dog. A real dog calls you over at the back of the cave. Talk to Barbas, the talking gray dog. He is the companion to Clavicus Vile, the Daedric Prince of Wishes. The altar in the cavern twisted Pircalmo's desire "to have something work well." It is also keeping Barbas bound here. He asks you to smash the altar. You can ask him about Clavicus Vile, why Barbas is down here, and what he is.

You smash the altar to Clavicus Vile, and Barbas runs off.

Return to the town, and talk to Ranneth at a stone altar where Alanya squirms, tied up. You tell her that Pircalmo didn't break the contract, that a Daedric altar twisted his spell. She realizes her mistake and that the town could use someone who knows about spell casting. She asks you to fetch Pircalmo, who was locked inside her home, while she unties Alanya. They will meet you there.

He is in the second bulb of the tree where you met Ranneth and Alanya at the beginning of this quest. When you tell him his wife is safe and waiting outside, he can't wait to leave.

"Master Pircalmo, Lady Alanya, please accept my apology."
"Don't worry. I thought it was my fault, too."
"What he means to say is these sorts of misunderstandings happen. We're not the type to hold a grudge."
"Right. Yes. Ah, that. That's what I meant."
"I'd like to extend you a more permanent offer here. We could use someone with your knowledge."
"I can't really…I don't know…Alanya…"
"Dear, she's offering you a job. You'd be the town mage."
"Really? I mean, yes, absolutely, if it's alright with you, dear."
"I think I'd quite like that. No more stone tables, though, Ranneth."

Talk to Ranneth, who thanks you for sorting out the situation and gives you a reward.

This Online-related article is a stub. You can help by expanding it.
Retrieved from "https://en.uesp.net/w/index.php?title=Online:Questionable_Contract&oldid=2008687"
Categories:
Hidden categories: