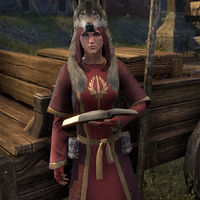 Predicant Maera is an Imperial priest of St. Alessia who can be found at the Southern High Rock Gate, Northern Morrowind Gate, and the Eastern Elsweyr Gate. She was added for the Midyear Mayhem event, and will grant players their first Pelinal's Midyear Boon Box and Scroll of Pelinal's Ferocity by completing the related quest. She is originally from the Imperial City, where she preached in the Temple District before fleeing upon the invasion of Molag Bal, but currently resides in the border keeps after being promised refuge by the generals in return for blessings to be bestowed to any alliance members that request them. She also spends all of her time reading a book alongside a cart, closely accompanied by fellow priests, including the Pelinal Predicant, Predicant Malpenix, and Sacerdote Aloisia, as well as being joined by the Empowered Soldier and a group of Supplicants.

She can be found at Gladiator's Quarters throughout Tamriel after the related quest is complete.

Since the 2020 Midyear event, Predicant Maera became able to sell special items. With each Midyear Mayhem, more stock is added:

If Predicant Maera is approached prior to starting the related quest, she will welcome you with "Are you aware of our patron Saint Alessia? Her deeds? Her champion?"

"Ah, another brave soul seeking the Blessing of the Whitestrake!
Though I am not as knowledgeable as Sacerdote Aloisia, I do know the account of Pelinal's Midyear Massacre by heart."
Is that what this crowd is about?
"Indeed! Shortly after we parleyed with your commander, Her Reverence began administering her blessings.
It's quite popular! All the soldiers want double rewards for their efforts on the battlefield."
Tell me more about this celebration.

The related quest can then be started by further inquiring into the Midyear Mayhem celebration.

If you start the quest by walking up to her at one of the Battlegrounds Gladiators' Quarters, the quest-start dialogue is only slightly different.

"Ah, another brave soul seeking the Blessing of the Whitestrake!
Though I am not as knowledgeable as Sacerdote Aloisia, I do know the account of Pelinal's Midyear Massacre by heart."
Is that what this crowd is about?
"Indeed! It's quite popular! All the soldiers want double rewards for their efforts on the battlefield."
Tell me more about this celebration.

If, however, the related quest has already been started by reading Details on the Midyear Mayhem, the conversation will begin differently, prior to continuing on the same as before.

"Sacerdote Aloisia can sound a bit overzealous in her sermons, but those who listen are inspired without fail.
Are you also looking to receive the Blessing of the Whitestrake?"
Is that what this crowd is doing?
"Indeed! Shortly after we parleyed with your commander, Her Reverence began giving her blessings.
It's quite popular! All the soldiers want double rewards for their efforts on the battlefield."
Tell me more about this celebration.

You can ask her more after accepting the quest.

"It's Pelinal's Midyear Massacre, celebrated by Imperials since … well, since the fall of the Ayleids!
We remember the Whitestrake's slaughter of Elves at Heldon Bridge, the key to capturing the Imperial City—before it was Imperial, mind you."
What are you offering, exactly?
"If you know the legend of Pelinal Whitestrake and Saint Alessia, you are on the path to understanding.
If not, well … those who accept the blessing are renowned for their brave deeds in days thereafter. Surely that's something your people value?"
And what do I do to participate?
"Holy writ states that at the battle of Heldon, fierce Pelinal's face and hair were covered in the blood of righteously slaughtered Ayleids.
Anoint yourself likewise in honor of his prowess, and return to me."

Tell me about Pelinal Whitestrake.
"He was the firebrand who led the fight for freedom against our brutal taskmasters, the Ayleids. We hold that his actions were divinely inspired.
The Bridge of Heldon was one of his many victories, unifying the tribes of Men against the Elves."

Who is St. Alessia?
"Once a slave, the Dragon God himself inspired her to rise up and rally the Men of Cyrodiil to overthrow their Ayleid masters.
Pelinal and Morihaus were her trusted confidants, and, depending on the translations, either or both were her lovers."

What happened at the Bridge of Heldon?
"The Elves sought to blockade the northern bridge, driving back Nords sent to reinforce St. Alessia's army.
The Whitestrake, ever eager for Elven blood, assaulted their lines and slew them, every one, before the Nords could even ready their arms."

Who are the priests of St. Alessia?
"Once we preached Alessia's truth in the Temple District of the Imperial City, before its siege and sacking by Molag Bal.
Many fell, but many fled, to carry on our work outside the city walls."

If you're Imperial, why did the garrison let you in?
"We made an arrangement with the general: in return for the garrison's protection, we would bestow blessings on any of your alliance who asks for them.
A few of us were taken into custody as a precaution, but I'm assured they're being well treated."

Upon returning to Predicant Maera after interacting with the Basin of the Gore Virtuous, she will go on to ask:

"So … how was it? Speak! Do you feel invigorated? Imbued with righteous power? Or perhaps struck dumb with awe by a vision of St. Alessia herself?
Go ahead–reveal to all your holy transmogrification!"
Nothing's happened so far.'
"Oh! Well, everyone's experience is different, to be sure.
But don't let that keep you from getting out there and making a legend for yourself. The Whitestrake will walk in your steps and goad you to righteous fury!"

This will complete the quest. Continuing to talk to Predicant Maera after the quest has been completed, will lead to the following remarks:

"Though Pelinal is seen as a controversial figure by some, none can dispute the mark he left on our land and culture.
And so we cry: hail the Whitestrake!"