Online:Path of the Hidden Moon

An ancient Khajiiti lich named Arum-Khal threatens to emerge from the depths of the Ashen Scar. If Vastarie and I are to have any hope of stopping him, I'll need to learn more about the monastic order he betrayed: The Order of the Hidden Moon. 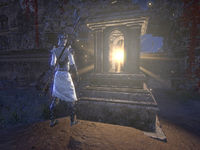 Continuing your conversation from the previous quest, Vastarie suggests you meet her at the temple's summit. She speculates that Arum-Khal's story may be associated with the The Order of the Hidden Moon, the ancient Khajiiti group of adepts that operated out of these ruins long ago. At the summit, you'll find a book on an altar. Read the book. It tells you the story of how The Order of the Hidden Moon came to be. A spirit will appear.

Vastarie: "Hmm. Some kind of Khajiiti children's tale?"
Mazza-Mirri: "You know better than that, witch of Azurah."
Vastarie: "Greetings, spirit. We've come in good faith."
Mazza-Mirri: "Very well. Who is this youth who travels with you, I wonder? Come, child. Let old Mazza-Mirri have a look at you."

Speak with Mazza-Mirri. She tells you that her order sealed Arum-Khal away ages ago using a relic called the Moonlight Blade. Unfortunately, their wards are fading, and there is no one left alive worthy enough to wield the Moonlight Blade. Instead of catering to your questions, she tells you to read the three stones scattered across the summit. One is behind the altar, another is to the left of the complex containing the altar, and the third is to the right of the summit ruins. Vastarie will provide commentary for each stone. 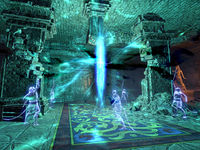 Mazza-Mirri shows you a vision of the past

Once you've read the inscriptions on the three stones, speak with Mazza-Mirri. She explains how her order opposed the dro-m'Athra, and how this path is dangerous. Arum-Khal is the result of falling for the darkness and its temptations rather than opposing it. She opens a portal into the ruins proper to further your studies.

Once inside the temple, Mazza will tell you the story of Arum-Khal. She summons a vision to better visualize the story.

Mazza-Mirri: "Now for the story no teaching stone can tell."
Mazza-Mirri: "Arum-Khal served our order for many years as our greatest champion. But as his power grew, so did his pride. In time, he renounced his faith in Azurah and turned to the dark path. The way of the dro-m'Athra."
Mazza-Mirri: "Many adepts fell under his sway, and the order collapsed into civil war. The battles sundered the temple and blighted the canyon below. We triumphed in the end, but Arum-Khal would not die. He fled—seeking refuge in one of his orbs."
Mazza-Mirri: "We locked the orbs away, but now our wards grow brittle, and Arum-Khal prepares to emerge once again. Only a warrior of the Hidden Moon can end this—and only with the powers of the Moonlight Blade."

After seeing the story, you can ask her about her plan for dealing with Arum-Khal. He has grown stronger in the centuries following his initial "defeat". The Order did manage to find a way to kill him permanently, but it's risky. She tells you how the Moonlight Blade is a gift from Azurah, and functions as more than just a weapon. Few have wielded its power, and those who have were of incredibly strong will. She seeks to test your resolve. Follow Mazza-Mirri into the next chamber and begin your trial. 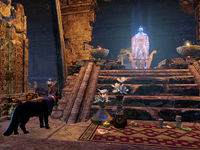 In the next room over, Mazza-Mirri will instruct you.

Mazza-Mirri: "The dro-m'Athra approach, child. Will you dance to the song of the Dark? Or will you close your ears and fight?"

There are three waves of two enemies that you must defeat. The first wave consists of a Dro-m'Athra Dreadnaught and Runecaster. Note that the enemies here have weapons that are not typical for their given class. For example, the Runecaster is a time bomb mage that wields a greatsword, when that class usually wields staves. The next wave consists of a Dro-m'Athra Shadow Walker and Battlemage. The third wave contains a Dro-m'Athra Vigilant and Thundermaul. Once these six enemies have been defeated, follow Mazza-Mirri into the next room. Here lies a mummy with the Moonlight Blade on its lap. Mazza-Mirri instructs you to take the blade. Once you do this, the spirit of Shando-ri appears. Speak with him. He tells you that he resides within the blade, destined to be with the next blade-bearer when they arrive to face Arum-Khal. Once you're done in this room, exit through the tunnel in the back. You will fall through a hole in the ceiling of the tomb, where you will meet back with Vastarie. Explain what you've learned and claim the reward for your findings.

This Elder Scrolls Online-related article is a stub. You can help by expanding it.
Retrieved from "https://en.uesp.net/w/index.php?title=Online:Path_of_the_Hidden_Moon&oldid=2329506"
Categories:
Hidden categories: